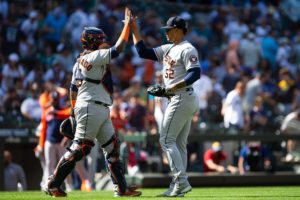 The Mariners lost their fourth straight game to Houston losing 4-2 last night. Houston closer Ryan Pressly used 20 pitches to record his 21st save of the season. That puts his usage tonight in question. Pressly had retired 32 consecutive batters before he gave up a single to Seattle SS J.P. Crawford in the ninth inning last night. That ended Pressly’s streak and tied him for the Astros’ franchise record.

The pitcher Pressly tied is tonight’s starter for Houston – Justin Verlander. Verlander has done everything to cement his favorite status on the AL Cy Young award in 2022. The Astros ace is 13-3 this season with a 1.86 ERA. He has won his last five consecutive starts and has been dominant in doing so. In those five games, Verlander’s ERA is 0.79. He allowed 0 or 1 earned run in each start and over 34 total innings Verlander struck out 36.

For his career, Verlander is 20-10 with a 3.15 ERA in games against Seattle. That includes five starts this season already. Verlander is 4-1 with a 2.60 ERA in those five trips to the mound against the Mariners. He started against Seattle last Saturday and pitched seven innings, allowed four hits, gave up one run, and struck out nine in a 3-1 victory.

The Mariners will counter with left-hander Robbie Ray, last year’s AL Cy Young winner. Ray hasn’t had the kind of success this season as last, but he has been pretty sharp as of late. For the season, Ray is 8-7 with a 3.90 ERA. He started against Houston last Sunday and picked up the loss after giving up six earned runs in just three innings. However, in his previous eight starts before last Sunday, Ray went 4-0 with a 1.75 ERA. In 51.1 total innings in those eight starts, Ray struck out 61 batters.

The Astros have now won six of their last nine games. Playing Seattle at home has almost guaranteed the Astros a win. Houston is 15-5 SU in the last 20 games against the Mariners at Minute Maid Park. Houston also does well against left-handed pitching. The Astros are 23-11 against lefties this season and they are 60-27 in their last 87 home games against a southpaw.

Despite the loss last night, Seattle is still 16-4 in its last 20 games. The Mariners are 1-5 SU in their last six games against Houston. Seattle has been playing well on the road. Last night’s loss broke a string of eight straight road wins. Over their last 26 road games, Seattle is 19-7. They are also 25-7 in their last 32 games overall.