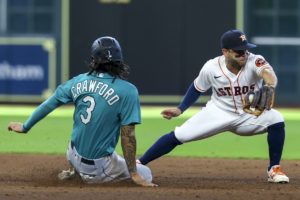 In their last 20 games, the Seattle Mariners have won 17 of them. They won 14 straight and then lost three in a row to their AL West Division rival Houston. That was just last week. After those three losses, Seattle then picked up the pieces and swept another AL West opponent, Texas. Now, it’s right back to the Astros and a four-game weekend series.

The Astros had an impressive run last week beating the Yankees in a quick two-game series and then the sweep of the Mariners. To begin this week, Houston lost all three games to AL West last-place Oakland. The Astros will face Seattle’s best pitcher, Logan Gilbert, to begin the series. Gilbert has been crushing it all season. He is 10-4 with a 2.77 ERA in 20 starts so far this season. In his last start, Gilbert pitched six innings and allowed five hits and two earned runs. He lost to Houston 3-1. It was the Mariners’ first loss in a game started by Gilbert since the end of June.

The Astros will go with right-hander Jose Urquidy. He has been a steady starter for the Astros with a 9-4 record in 18 starts this season. His ERA is 3.93, but he has pitched much better at home where his ERA drops to 2.63. Urquidy’s last start was against Seattle. He went six innings and allowed one earned run on four hits. He will face a Mariners lineup that has been playing much better over the past 15 days. Seattle ranks in the top-10 in batting average, OBP, and OPS over the past 15 days.

Gilbert will face a pretty strong Astros lineup that includes AL MVP contender Yordan Alvarez. What’s interesting is that Gilbert pitches even better away from home where his ERA drops to 2.42 with a WHIP of 1.18. Gilbert also has a win over Houston already this season. Back on June 8, he pitched six innings, allowed three earned runs, and the Mariners beat the Astros 6-3. The losing pitcher that day was none other than Urquidy.

The total has also gone Under in six of Seattle’s last eight games. In the last seven Mariners games against a right-handed starting pitcher, the Under is 6-1.