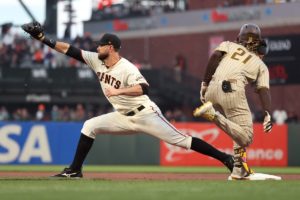 Tonight’s Giants-Braves matchup in Atlanta features two of the better pitchers in the National League. San Francisco’s Logan Webb is coming off what is likely his best start of the season. He pitched seven innings, didn’t allow a single run, and struck out nine. The only issue was that the performance came against Kansas City, which is not exactly a lineup that puts fear in pitchers.

Still, Webb is 6-2 for the season and has a very respectable 3.43 ERA. He has kept San Francisco in games this year. Of his 13 starts thus far this season, the Giants have won nine times. Webb has only allowed more than three earned runs twice and he has never allowed more than four. He gave up four earned runs to St. Louis in May, but the Giants still pulled out a victory.

Opposite Webb will be Atlanta’s Max Fried. Fried started the season slowly, but he has been very good as of late. He is 7-2 overall and has a 2.94 ERA. The Braves have won his last five starts in a row and they have won nine of his last 11. What has really helped Atlanta lately is a bullpen that has worked its way into the top-5 in ERA. That was one of the reasons why the Braves had their recent 14-game winning streak.

The Braves’ streak came to an end in their weekend series with the Cubs. Atlanta ended up losing the series but won on Sunday 6-0. That win gives the Braves 15 wins in their last 17 games. They also get to return home where they are 7-0 SU in their last seven games. The Braves have fared well at home against the Giants. Atlanta is 4-2 SU in the last six games against San Francisco at Truist Park.

The Giants are no slouch either as they battle to keep pace with San Diego and the Los Angeles Dodgers in the NL West. San Francisco is 7-2 SU in its last nine games, but Atlanta has been a thorn in the side of the Giants. San Francisco has won just five of the last 16 games played against the Braves.

Despite two of the best pitchers in the NL, tonight’s total is set at 8. There are a number of good reasons why. It starts with the offenses. The Giants are sixth in MLB in runs per game scoring 4.86 per. Right behind them in seventh is the Braves who average 4.73 runs per game. Both lineups are very capable.