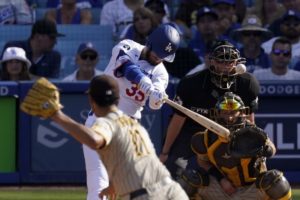 The San Diego Padres will alter their rotation on Wednesday after facing their first deficit since the playoffs started last week. The Padres will go back to right-hander Yu Darvish after a 5-3 loss to the Los Angeles Dodgers in Game 1 of the best-of-five National League Division Series on Tuesday. Darvish was strong in Game 1 of the NL wild-card series on Friday against the New York Mets.

In San Diego’s playoff opener against the Mets last week, Darvish (1-0, 1.29 ERA postseason; 16-8, 3.10 ERA regular season) allowed just one run over seven innings. However, he heads to a familiar mound where he failed to earn postseason success.

It was Darvish who started Game 7 of the 2017 World Series against the Houston Astros when he was a member of the Dodgers. In just 1.2 innings, Darvish gave up five runs, four of them earned, and Houston won. That postseason, Darvish started four games and went 2-2 with a 6.14 ERA.

Darvish, who didn’t return to the Dodgers after the 2017 season, has subsequently rediscovered himself in the time since. His pitching is somewhat reminiscent of his All-Star caliber seasons in four of his first five seasons in the major leagues. As a member of the Chicago Cubs in 2020, he finished second in the race for the NL Cy Young Award. The following year, he was an All-Star for San Diego and this season he has been outstanding.

The Padres ace pitched 25 innings in four starts against the Dodgers this year, going 1-2 with a 2.52 ERA. He pitched seven scoreless innings in a victory over L.A. on September 2. Darvish has made 10 career starts versus Los Angeles and has a 3-5 record and a very respectable 2.47 ERA.

Kershaw was forced to miss the postseason last year due to forearm soreness. Tonight will be his first playoff start since going 2-0 with a 2.31 ERA in the 2020 World Series against the Tampa Bay Rays. Kershaw was outstanding against the Padres this season, finishing 1-0 with a 0.75 ERA in 12 innings over two starts. He has made 45 career starts in the regular season against San Diego, going 23-9 with a 2.03 ERA over 292 innings. In Game 2 of the 2020 NL Division Series, he defeated the Padres after pitching six innings and allowing three runs.

Before this season, the Dodgers had made nine straight appearances in the playoffs with just one World Series – 2020 – to show for it. Los Angeles was eliminated last year in the NLCS by the eventual World Series champion, Atlanta. In 19 games versus the Dodgers during the 2022 regular season, the Padres managed just five wins.