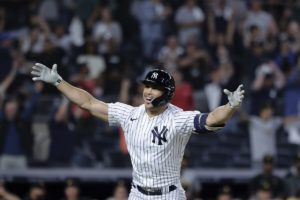 AL MVP favorite Aaron Judge hit his 60th home run of the season as the New York Yankees pulled out a close win over the Pittsburgh Pirates on Tuesday. It was actually teammate Giancarlo Stanton’s grand slam that won the game. Judge’s home run was historic in that he needs only one to tie former Yankee Roger Maris for the most home runs in the American League in a season.

Judge’s home run tied him with Babe Ruth for the second-most homers in franchise and league history. Ruth his 60 homers in 1927. Judge’s 60th helped start a five-run rally that propelled the Yankees to the win last night. Stanton, who has had a hard time getting back into the swing of things since coming off the injured list, hit the second game-ending grand slam for New York this season.

Despite having 10 hits in the first game of the series on Tuesday, Pittsburgh (55-93) has now gone five games without a win in their current losing streak. In his last 13 games, Bryan Reynolds is hitting .340 (18-for-53). He had four hits, including a home run that tied the game and a single that gave the Pirates the lead.

The Yankees Luis Severino, who is 5-3 with an ERA of 3.45, will come off the injured list on Wednesday after being out for two months with a right lat strain. The right-hander is scheduled to make his first start since the 13th of July when he faced the Cincinnati Reds and surrendered three home runs in two innings. Last month, the Yankees placed Severino on the 60-day injured list, a decision he wasn’t too happy with.

Severino will face the Pirates for the second time in his last three appearances. On July 6, he pitched six innings for New York and allowed four hits while throwing 88 pitches. New York beat the Pirates 16-0.

Roansy Contreras, who was one of the minor-leaguers acquired by the Pirates from the Yankees in exchange for Jameson Taillon in January 2021, is scheduled to make his 16th start for Pittsburgh. Contreras is 5-4 with a 3.24 earned run average this season. Since being recalled from Triple-A Indianapolis on August 17, the right-hander has made six starts and is 2-2 with a 2.43 earned run average (ERA). On Sept. 14, Contreras pitched four innings against Cincinnati. He was not involved in the decision after giving up one run on three hits. Pittsburgh won 10-4. This will be Contreras’ first career start against the Yankees.