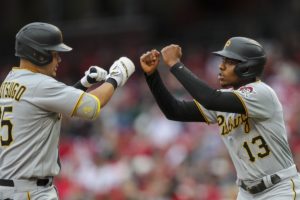 Somehow, the Pittsburgh Pirates have managed to beat the Dodgers in the first two games of this series. The Pirates have actually beaten L.A. in four of five games this season. They will go for the sweep on the road tonight with left-hander Jose Quintana getting the start. Pittsburgh has won five of its last eight games, but don’t get too excited. The previous week, the Pirates went 1-5 and were outscored by 32 runs.

Quintana has actually been very solid for the Pirates this season. He’s only 1-2, but that has more to do with the Pirates’ inability to score. Quintana’s ERA thus far this season is a very respectable 2.15. In his last four starts, Quintana has allowed just two earned runs. Both came in a loss to St. Louis. One of those starts was against this same Dodgers team. Quintana went six innings, allowed just two hits and held L.A. scoreless in a 5-1 Pirates win.

Despite that loss, the Dodgers have actually performed very well against left-handed pitching this season. So far, they are 13-4 and a handful of the Dodgers’ best have hit Quintana pretty well. Chris Taylor, Freddie Freeman, Trea Turner, and Mookie Betts are a combined 18-for-53 (.340) against Quintana. Wanting to avoid the sweep, the Dodgers will be looking to have success against Quintana and pay him back for that earlier start.

Pittsburgh won the first two games of the series – 6-5 and 5-3. Earlier this season, the Pirates took two of three from the Dodgers in Pittsburgh. Those four wins give Pittsburgh a 4-16 SU record against the Dodgers in the last 20 games between the two teams. The two wins in this series are the only two victories for Pittsburgh at Dodger Stadium in the last 14 trips.

Even with the two losses to Pittsburgh, the Dodgers are 13-4 SU in their last 17 games. At 33-16, the Dodgers lead the NL West by three games. San Diego is second and San Francisco is 5.5 games back in third place.

It shouldn’t be a surprise that Pittsburgh’s O/U mark this season is 18-25-5. The Pirates are 29th in runs in MLB. Five of their last seven road games have gone Under. The Dodgers lead the majors in runs scored averaging 5.51 runs per game. It is surprising that four of the last five Dodgers games have resulted in the Under. At home, it’s been a different story. For the season, the Over is 13-9 at Dodger Stadium and nine of the last 11 Dodgers home games have seen the total go Over.