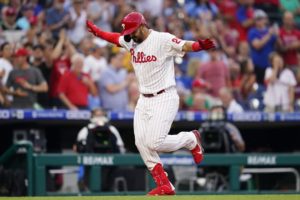 If there is one thing the St. Louis Cardinals have been this season, it is inconsistent. They are still very much alive in the NL Central Division race. At 45-40, the Cardinals are just 2.5 games behind division leader Milwaukee. The problem is that the Cardinals are fading at the moment. St. Louis lost four straight before beating Atlanta 3-2 last night. Over their last eight games, the Cardinals have just two wins. Tonight, they have to go up against one of the toughest pitchers to face in the National League – Philadelphia’s Zack Wheeler.

Wheeler is 7-4 on the season and his last win came against…you guessed it…St. Louis. Last Sunday, Wheeler pitched seven strong innings allowing just four hits and no runs as Philadelphia shutout St. Louis 4-0. Wheeler’s ERA for the season is 2.66 and he has a WHIP of 1.07. With 99 strikeouts in 88 innings, his K/9 ratio is 10.1. Everything about Wheeler puts him squarely in the race for the NL Cy Young.

The Phillies ace will go up against a St. Louis lineup that is inconsistent. As of late, that lineup is not producing. NL MVP candidate Paul Goldschmidt still leads the league with a .342 batting average (2nd in MLB). Goldschmidt also has 19 home runs and 65 RBIs. His teammate Nolan Arenado is batting .292 with 17 homers and 55 RBIs. The pair cannot carry the Cardinals by themselves and they haven’t been lately.

Over their last eight games, the Cardinals are averaging 2.38 runs per game. They were shut out in two of the games and only scored more than three runs once. This is coming from a team that is still ninth in MLB in scoring. The Cardinals average 4.59 runs per game.

Opposite Wheeler will be Cardinals veteran Adam Wainwright who is 6-6 with a 3.26 ERA this season. Wainwright faced Wheeler last Sunday and he had a much tougher time than his counterpart. Wainwright did go 5.2 innings, but he allowed eight hits and four earned runs. He’s actually given up four earned runs in three of his last four starts.

In the three-game series last week between these two teams, the Phillies won the series with two wins. Philadelphia outscored the Cardinals 15-10. The Phillies’ offense has been one of the best in the majors this season. They average 4.86 runs per game, which is good for third overall. Over their last ten games, the Phillies have averaged 6.1 runs.