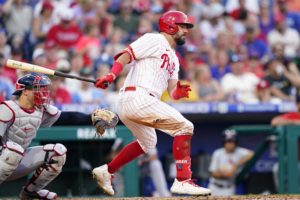 The Phillies and Cardinals meet for the fourth straight night. Philadelphia holds a 2-1 advantage in a series that has produced a grand total of just 10 runs. Philly recorded two straight shutouts – 2-0 and 1-0 – in the first two games and the Cardinals won yesterday 4-3. Tonight’s matchup should be another low-scoring affair as Philadelphia’s Aaron Nola takes on the Cardinals’ Miles Mikolas.

Nola is 5-6 on the season with a 3.15 ERA. He has been effective for the Phillies since the end of May. The Phillies lost eight of Nola’s starts in a row from mid-April until May 21. Since, Philadelphia has won six of Nola’s last eight starts. In those eight starts, Nola gave up five earned runs to the Giants and four to the Braves, but the Phillies offense was able to come through and produce wins.

The Phillies right-hander has some pretty impressive metrics ranking in the top 20 percent of pitchers in hard-hit percentage and strikeout percentage. He forces weak contact and he strikes out a lot of batters. In those last eight starts, Nola has fanned 56 batters and only has one start with fewer than 5 Ks.

Opposite Nola will be the Cardinals’ Mikolas. He is a lot like Nola with a 5-7 record and an impressive 2.72 ERA. He has lost each of his last two starts, one to Atlanta and the other to these same Phillies. He lost a 5-3 decision on July 1 to Philadelphia. He allowed two earned runs in 5.1 innings. The difference between Mikolas and Nola is that Mikolas does not have impressive metrics. He also sports an xERA of 3.51 which indicates some negative regression coming.

The Cardinals still have the talent to score with All-Stars Paul Goldschmidt (.340, 19 HR, 65 RBI) and Nolan Arenado (.292, 17 HR, 55 RBI) in the lineup. Philadelphia has been without Bryce Harper – also an All-Star – but slugger Kyle Schwarber (28 HR, 57 RBI) continues to pound the ball. In the last seven days, Schwarber has hit 7-for-22 with five of those hits being home runs.

The Under is trending for both teams. The total has gone Under in five straight Phillies games and in eight straight Cardinals games. Mikolas is even better at home with a 2.60 ERA at Busch Stadium. Likewise, Nola actually pitches better on the road. Nola’s road ERA is 2.13 this season. Four of Nola’s last five starts have resulted in the Under. Each of Mikolas’s last four starts has gone Under the total.