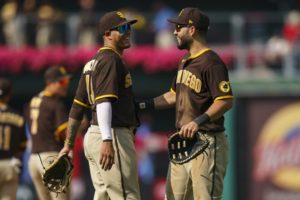 Both Philadelphia and San Diego played yesterday, but the Padres remain at home to open a four-game home stand against the Phillies. Philly has dropped three games in a row, including a two-game series with Texas to start the week. It won’t get any easier tonight as the Phillies will go up against one of the National League favorites to win the Cy Young award – Joe Musgrove.

Musgrove has been incredible so far this season. He is a perfect 8-0 and has what seems to be an unsustainable ERA of 1.59. In 12 starts this season, Musgrove has yet to allow more than two earned runs. The Padres have won all but one of Musgrove’s starts and he has pitched at least six innings in all 12 trips to the mound. With their best pitcher on the mound, the Padres can challenge the Mets for the most wins in the NL. San Diego is 44-27 while the Mets are 45-26.

San Diego has been playing without Manny Machado who is out indefinitely with an ankle injury. Machado is hitting .328 with 12 homers and 46 RBIs, but the Padres have been getting along just fine without him. They just swept Arizona rather easily winning the third and final game of the series last night by a score of 10-4. That gives the Padres 14 wins in their last 20 games.

The Padres will go up against Philadelphia pitcher Ranger Suarez who is 5-4 with a 4.43 ERA. Suarez pitched 5.2 innings in his last start allowing three hits and three runs in a 5-3 win over Washington. The Phillies are 2-4 in Suarez’s last six starts.

Despite the three straight losses, the Phillies have been playing very well since they let manager Joe Girardi go. Philadelphia is 15-5 SU in its last 20 games. The Phillies are now two games above .500 (36-34) and 8.5 games out of first place in the NL East. They are also four games behind Atlanta (40-30) which is in second place in the division.

The Padres are 7-2 SU in their last nine games at home. San Diego took two of three games against the Phillies earlier this season. Each game of the series was a shutout. The Padres won 3-0 and 2-0 while the Phillies won one game by a score of 3-0.