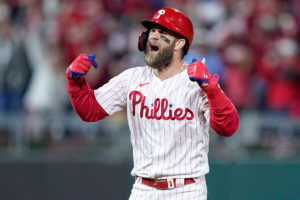 Prior to facing the Philadelphia Phillies (96-77) in Game 1 of the World Series, the Houston Astros (113-56) are 9-0 in their past nine games. They have also won their last six games at home where they will start their quest for their second World Series title in the past six seasons. Houston will have home-field advantage throughout the series.

The Phillies-Astros odds have been fairly stable in the days leading up to tonight, with Houston currently sitting at -175. Additionally, Game 1’s total has remained constant at 6.5 runs. Keep in mind that in Philadelphia’s last seven games, the Over is 5-2.

Before getting shelled for seven hits and six earned runs over 4.2 innings in Philadelphia’s 8-5 defeat to the San Diego Padres in Game 2 of the NLCS, Aaron Nola had not allowed an earned run in three straight starts. Despite the terrible start, Nola has pitched 17.1 innings in the postseason with a respectable 3.12 ERA and 1.10 WHIP.

Justin Verlander will start Game 1 for Houston. He had a tough start against Seattle in the ALDS when he allowed 10 hits and six earned runs in 4.0 innings. He recovered though and allowed just three hits and one earned run in Game 1 of the ALCS against the New York Yankees. Verlander also struck out 11. During the regular season, Verlander had a record of 18-4, a 1.75 ERA, a 0.83 WHIP, and 185 strikeouts.

The Astros’ ace will have his hands full with a red-hot Phillies lineup. Bryce Harper hit one of the biggest home runs in Phillies franchise history in the bottom of the eighth inning of Game 5 of the NLCS. Harper’s home run came with Philadelphia behind San Diego 3-2 and one runner on base. The bullpen held on to the 4-3 lead that his team had gained as a result, sealing the series victory and sending the Phillies to the Fall Classic.

Throughout Philadelphia’s 9-2 postseason run, Harper has been terrific, batting.419 with five home runs, 10 runs, and 11 RBIs. With a run output average of 5.18 runs per game, the Phillies enter the World Series in first place among all postseason teams. The Astros pitching staff, which has a 1.88 team ERA in the postseason, will put this squad to the test.

In the opening three innings of Game 4 of the ALCS, the Astros were behind 3-0 before scoring four runs to take the lead. Jeremy Pena went 2-for-4 with a home run and three RBIs in Houston’s 6-5 series-clinching victory over the Yankees.

Houston is undefeated at 7-0 SU in this year’s postseason. The Astros have won eight of their previous nine games with an opponent scoring two runs or less, and in the other two games, they defeated New York 6-5 and Seattle 8-7, taking care of business on offense.

After hitting home runs in three of the first four games of the series, Kyle Schwarber was intentionally walked three times in Philadelphia’s victory over the Padres in Game 5. Along with Harper, he gives the Phillies plenty of power. The Astros just completed a four-game sweep of the Yankees in the ALCS, and their offense has averaged 4.43 runs per game throughout the postseason.