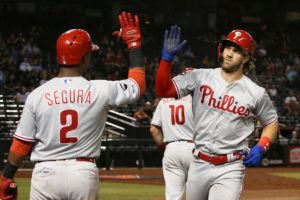 The Phillies won a second straight series over the weekend by taking two of three games from Pittsburgh. Philadelphia had won six straight games before losing on Sunday, but they are still right in the thick of the NL wild-card race. The Phillies will take on Arizona tonight. The Diamondbacks won three in a row over the Chicago White Sox over the weekend. The D-Backs pitching held Chicago to just nine total runs. Arizona will be hoping for more of the same from Madison Bumgarner tonight.

The veteran left-hander hasn’t been that reliable this season. He is 6-13 overall with a 4.53 ERA. In his last three starts – all losses – Bumgarner has allowed 16 earned runs in 17 total innings. He has allowed at least four earned runs in each of his last five starters. Bumgarner also is not showing any signs of improvement coming anytime soon. His xERA of 5.30 suggests that he will continue to give up a lot of runs.

That isn’t good news for Arizona as the Phillies now have slugger Bryce Harper back in the lineup. Harper and the rest of the Phillies have the fourth-best OPS in the majors against left-handed pitching. Bumgarner has started a game against the Phillies this year. Back in June he pitched five innings and gave up three runs – one earned – in a 4-0 loss. Bumgarner has just one quality start since July. He pitched eight innings and gave up two earned runs in a win over Washington. The Nationals have the worst record in the National League.

Philadelphia will counter with a left-hander of its own – Ranger Suarez. The Phillies lefty has had a very good season and has pitched well over the last month or so. Suarez is 8-5 with a 3.38 ERA so far this season. He’s even better when he’s pitching on the road. Suarez has a road ERA of 2.41. Philadelphia has won six of his last seven starts. In four of the six wins, Suarez pitched at least five innings and did not allow an earned run.