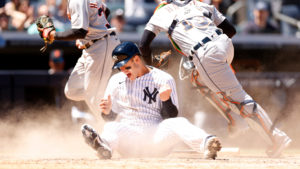 It’s the best in the majors against the worst. The New York Yankees have the best record (53-20) in baseball. Their opponent today, Oakland, has the worst (25-49). The teams are essentially polar opposites of each other. The Yankees are a top-5 team in many offensive categories including runs per game where they are second (5.03). The A’s are a bottom-5 team in the same categories. Oakland is 29th in runs per game at 3.18.

Making matters even more difficult for Oakland is left-hander Jordan Montgomery. He is 3-1 with a 2.97 ERA. The Yankees have won each of his last six starts. What Montgomery gets that his Oakland counterparts do not is run support. In each of his last six starts, the Yankees have scored at least five runs. Montgomery did give up four earned runs his last time out, but that was to Tampa Bay, and New York did win the game 5-4.

Oakland will counter with one of its best pitchers, Paul Blackburn. He is 6-3 with a 2.97 ERA, which is an accomplishment on a team with just 25 total wins so far this season. As good as Blackburn has been, the A’s have still managed to lose four of his last five starts. In those four losses, Oakland scored two or fewer runs and was shut out twice. Like Montgomery, Blackburn had a tough go last time out. He gave up seven earned runs to Seattle.

The A’s will also have to contend with a home Yankees crowd. New York has been playing extremely well at home recently. The Yankees have won 16 of their last 18 home games and they are 13-4 SU in their last 17 games overall. Two of those losses came over the weekend as the Yankees split a four-game series with Houston. The Astros have the second-best pitching staff in MLB. Yankees pitchers are even better at home where their 2.94 ERA drops to 2.63.

The A’s have been shut out more times than any team in the majors. It’s no surprise then that Oakland trends Under with an O/U record of 31-36-7 for the season. The total has gone Under in five of the last six games when the A’s have played the Yankees on the road. The Under has hit in eight of the last 11 A’s-Yankees games overall.