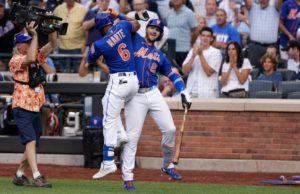 It started fast and furious and when it was over the New York Mets won the first game of the Subway Series last night, 6-3. Aaron Judge and Anthony Rizzo both hit home runs in the top of the first inning, but the Mets answered with a four-run outburst in the bottom of the inning. Now, it’s onto Game 2 and the Mets are in a great position to deliver another huge win. Ace Max Scherzer takes the mound tonight against the Yankees Domingo German.

Scherzer is 6-2 this season and has a very respectable 2.22 ERA. Since returning from injury, Scherzer has made four starts and has not allowed more than two earned runs. He has struck out 39 batters with eight or more strikeouts in each start. The Mets have won two and lost two of those starts. In his last start, Scherzer pitched six innings and allowed two earned runs in a loss to San Diego.

The Mets ace will face a lineup that is dangerous. Last night’s game could have gotten out of hand with Judge and Rizzo hitting homers in the first inning. Mets pitcher Taijuan Walker, who picked up his eighth win of the season, settled down and pitched six innings allowing three earned runs. Scherzer will likely face some adversity and how he deals with it will determine the outcome of the game.

The Yankees will start German who returned from the 60-day injured list just last week. He made his first appearance since May pitching three innings against Houston. German gave up six hits and five earned runs in a 7-5 loss to the Astros. German was 4-5 last year, but in 2019 the right-hander went 18-4 for the Yankees. He will face an equally dangerous Mets lineup that proved last night it can score against anyone.

The Mets are 6-3 SU in their last nine games. After losing three games in a row and scoring just four total runs, the Mets have won their last two games scoring 8 and 6 runs in the two victories. The Mets have done well at home, especially at right-handed starting pitchers. In the last 28 such games, the Mets are 20-8.