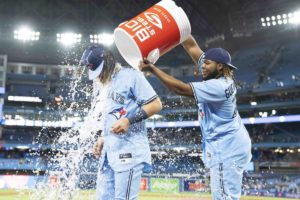 Monday night’s first game of a three-game series between the New York Yankees and Toronto Blue Jays will continue the Aaron Judge home run watch. After the Yankees defeated the visiting Boston Red Sox 2-0 Sunday night in a game that was delayed to six innings by rain, Judge’s career high for home runs remained at 60. Judge went 1-for-2 last night with a double and a walk. He aims to surpass Roger Maris, a former Yankee, who established the American League record for most home runs in 1961 with 61. Judge needs two homers to pass Maris.

The Yankees (94-58) have already secured a postseason spot, but a victory over the Blue Jays may give them first place in the American League East (86-67). They currently have an 8 1/2 game lead over the Blue Jays.

On Monday, the Yankees will start right-hander Luis Severino (6-3, 3.36 ERA). In 17 career games (14 starts), Severino is 6-3 with a 3.94 ERA versus the Blue Jays. Following a five-inning, one-run start against the Pittsburgh Pirates on Wednesday, it would be Severino’s second start following a two-month absence due to an injury (right lat strain). The Yankees have won each of Severino’s last three starts.

Toronto is expected to start right-hander Kevin Gausman (12-10, 3.32 ERA). In 26 career games (20 starts), he has an 8-7 record and a 3.53 ERA against the Yankees. Gausman didn’t give up a run in his last start against Philadelphia, but the Blue Jays went on to lose a close one, 4-3. In his prior two starts, Gausman allowed five earned runs each to Tampa Bay and Texas.

With a 7-1 road win over the Tampa Bay Rays on Sunday, the Blue Jays split the four-game series and locked up the top wild-card spot in the American League. The Seattle Mariners, who are in the third wild card spot, are 2.5 games behind the Blue Jays and two games ahead of the Rays. Due to their respective advantages in their season series with the Blue Jays, the Mariners and Rays have the tiebreaker over Toronto.

George Springer, a seasoned playoff performer for Toronto, blasted two home runs and three RBIs on Sunday. Shane McClanahan, the Rays’ top starter, gave up both home runs. Springer occasionally serves as the designated hitter despite having pain in his right arm while playing. When he begins off in center field, he frequently is taken out for the final inning or two defensively. On Sunday’s bottom of the ninth, Bradley Zimmer manned the center position.

The Yankees have won their last seven straight, but they are just 1-4 SU in their last five against Toronto. New York is, however, 9-3 SU in the last 12 against the Blue Jays on the road. Toronto put up 21 runs in the four-game series against Tampa Bay. The Over has hit in six of the Blue Jays’ last eight games.