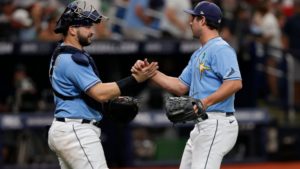 The New York Yankees became the first MLB team to win 50 games this year when they beat the Rays 4-2 on Monday. After last night’s 5-4 loss, the Yankees look to rebound and win the series with Jordan Montgomery taking the mound against Tampa Bay’s Shane Baz. After Monday’s ace showdown between Gerrit Cole and Shane McClanahan, tonight’s pitching matchup clearly favors the Yankees and Montgomery.

The Yankees left-hander is 3-1 on the season with a 2.72 ERA. New York has won each of Montgomery’s last five starts. He has pitched at least six innings in all of those starts and allowed no more than two earned runs in a single outing. In fact, Montgomery has allowed more than two earned runs in a start just twice this season. He allowed three in his first start of the season against Boston. He also allowed three in a loss to Baltimore in mid-May.

On the other side is Baz who will start for just the third time this season. He didn’t look good in his first start just 11 days ago. Baz gave up five earned runs in 2.1 innings in a loss to Minnesota. He did, however, pitch well last week in his second start. Baz went six innings, didn’t allow an earned run, and struck out seven. But, that was against Baltimore and the Rays went on to lose that game 1-0.

The problem for Baz will be a Yankees lineup that just doesn’t seem to have any holes. Aaron Judge leads the majors in home runs. Six Yankees have double-digit extra-base hits. Anthony Rizzo and Gleyber Torres have been red-hot and the player who is second on the team in hits is someone not many have heard of – Isiah Kiner-Falefa.

The Yankees have taken over as the top-scoring team in MLB. They are averaging 5.12 runs per game and have averaged 5.67 over their last three games. Despite the scoring, the Yankees trend Under for the season. Their O/U record is 30-36-2, which is identical to Tampa Bay. Four of the Yankees’ last six games on the road have gone Over the total.