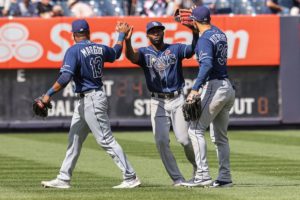 The Yankees were almost guaranteed to win the AL East Division not too long ago. The Yankees led the division by 14.5 games at the start of August. That lead is now down to six games and the Tampa Bay Rays would like to shorten that lead even more tonight. With a 10-18 record for the month of August, New York had only a 3-4 record versus American League bottom-dwellers like Oakland and the Los Angeles Angels.

They’ll play the Rays tonight, who had an 18-9 month of August. The AL’s best record for the month was that one. The Rays have won nine of their previous eleven games and each of their last three. Back in the middle of August, Tampa Bay defeated the Yankees in two of the three games in their series.

For the Rays, Jeffrey Springs will get the ball first. This season, he has a 2.76 ERA and a 6-4 record. The left-hander for the Rays had a fantastic month of August, going 3-1 with a 2.93 ERA in five starts. However, he suffered damage in his most recent start. Boston got five runs off of him in six innings last Saturday. In 10 career contests, Springs has faced the Yankees. He has a 2.57 ERA and is 1-1. His two starts versus New York this year have been the only ones. Springs has a 2.45 ERA and is 1-1.

Domingo German will start for New York tonight. German has two of his longest outings of the season under his belt and is 2-2 with a 3.19 ERA. He pitched 6.1 innings in a win over the Mets and 7.2 in a loss to Oakland. In seven career starts versus the Rays, German is 3-1. He has a 6.32 ERA. On August 17, German pitched against Tampa Bay and gave up three runs in 4.2 innings.

Although the Yankees have lost four of their last five games, they have won six of their last nine versus the Rays. In its previous 19 games versus AL opponents, New York is 6-13 SU. The Rays have won their last six games at home and are 9-2 over their last 11 games. In the previous 12 Yankees-Rays games, the Under was 8-4.

Tampa Bay does very well at home. The Rays have won 88 of their last 129 home games and, interestingly, have won 99 of their 139 home games against a right-handed starting pitcher.