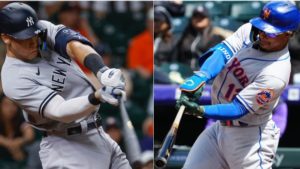 It’s that time of year again. The Subway Series is back and many New Yorkers are looking forward to what could be a potential World Series matchup. The Yankees are the best team in baseball with a 66-31 record. The Mets, at one time, had the best record in the National League but their play recently has allowed the Dodgers to take over that role. The Mets lost three of their last four games breaking a three-game losing streak with an 8-5 win over San Diego on Sunday night.

The Mets will start Taijuan Walker who is having a strong season in 2022. Walker is 7-2 with a 2.55 ERA. The Mets have won five of his last seven starts and over those seven starts and 45 innings, Walker has allowed just nine earned runs. In his last two starts, Walker has allowed just one earned run across 13 innings. He will have his hands full tonight with a Yankees lineup that is the top-scoring team in the majors.

Over the weekend, the Yankees took two of three games from Baltimore. New York scored 16 runs in the series and Aaron Judge, MLB’s home run leader, led the way. Judge went 8-for-13 in the series and hit three home runs and had eight RBIs. The Yankees star and AL MVP favorite now has 37 home runs for the season. Teammates Giancarlo Stanton (24) and Anthony Rizzo (22) are also in the top ten in home runs this season.

While Walker deals with the Yankees lineup, Jordan Montgomery is tasked with slowing down the Mets. The Mets are sixth in scoring, averaging 4.66 runs per game. Pete Alonso is fifth in the majors in homers with 25 and leads MLB with 82 RBIs. Montgomery is 3-2 with a 3.24 ERA. The Yankees have lost each of his last four starts. He has pitched well enough to win allowing 2, 3, 2, and 1 earned runs in those last four starts.

Both teams have proven they can score and have top-10 offenses. The Over has been a trend for both teams. Since the Yankees beat the Pittsburgh Pirates 16-0 not long ago, the Yankees have hit the Over in 13 of 16 games. That includes the Over cashing in eight of the Yankees’ last ten road games.