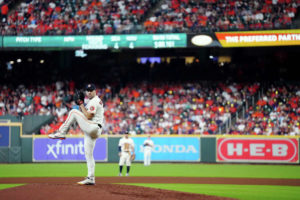 At first glance, the lineups of the Cleveland Guardians and Houston Astros don’t seem to have much in common, but there is a connection that unites them both. It’s an important connection for right-hander Luis Severino of the New York Yankees.

Severino, who will start Game 2 of the AL Championship Series for the Yankees tonight, knows that the Astros are similar to Cleveland. The difference is that Houston has much more power than the Guardians. Severino will do his best to contain that power.

Severino pitched 5.2 innings in Game 3 of the ALDS and gave up three runs on eight hits while striking out six. In seven career games (six starts) against the Astros, Severino is 2-3 with a 3.82 ERA. This year, he lost both of his starts against Houston, both in late June, when he allowed a total of five runs on eight hits over the course of 12 innings. Severino has made three postseason starts in his career against the Astros and is 0-2 with a 4.15 ERA.

For Houston, a 4-2 Game 1 winner on Wednesday, left-hander Framber Valdez will get the start. He pitched well in Houston’s 4-2 victory over the Seattle Mariners in Game 2 of the ALDS. Valdez gave up two runs over 5.2 innings and allowed four hits, three walks, and six strikeouts.

The performance was a little different from Valdez’s regular season when he made 25 straight quality starts to set a big league single-season record. Valdez most certainly has to revert to his former form if Houston is to take a 2-0 lead before the series moves to New York.

In three starts versus the Yankees in his career, Valdez is 0-1 with a 6.75 ERA. In his lone start against New York this season, on June 23 in the Bronx, he gave up three runs on two hits over six innings, but he was not involved in the decision.

Houston may reduce the strain on its bullpen by placing Valdez after Verlander in the rotation. This will create the conditions for the Astros rotation to succeed later in the series. Verlander led the AL with 201.1 innings pitched this season. He pitched six innings in Game 1.