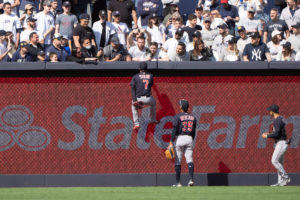 The Yankees lost a single game to the Astros yesterday dropping a 2-1 decision to the Astros. In their last nine games, New York has won six and all three losses were to Houston. Now, it’s on to a weekend series against Cleveland. Gerrit Cole (6-2, 2.99) gets the start for the Yankees who lead the majors in ERA at 2.92. New York pitchers just don’t give up many runs. Guardians pitchers, on the other hand, have had some issues.

Cleveland’s starter tonight, Aaron Civale, has had his share of difficulties this season. He has a record of 2-4, but his ERA is an eye-popping 7.24. From late April to mid-May, Civale had a four-game stretch where he allowed six earned runs in three starts. One of those games was against Oakland, which is one of the worst offenses in the majors. Civale allows opposing hitters to bat .306 against him. That’s not good especially when you consider that offense is down across MLB for the season.

Cole has been outstanding for most of the season and he really hasn’t even had his best stuff. The Yankees have won 11 of his 15 starts. He lost his last start against Houston, but it wasn’t really on him. Cole pitched seven innings and allowed a single earned run, but his teammates got no-hit by Houston and lost 3-0. In his last three starts, Cole has pitched 20.1 innings, allowed two earned runs, and struck out 27.

New York is second in the majors in scoring averaging 4.99 runs per game. Aaron Judge leads MLB in home runs with 29. As a team, the Yankees have hit 127 dingers and lead the majors with 1.65 homers per game. Anthony Rizzo has 21 and Giancarlo Stanton isn’t far behind with 19.The New York lineup will present some problems for Civale and the Cleveland relievers.

After their loss yesterday, the Yankees are now 4-1 SU in their last five games. They have had success against Cleveland recently going 9-3 in the last 12 games between the two teams. New York is 6-1 in the last seven trips to Cleveland.

The Guardians just won three of five games against Minnesota, the team they are chasing in the AL Central Division. Those are the team’s only three wins in their last nine games. The Guardians trend Over with a 35-33-1 O/U record for the season. The total has gone Over in four of the last five Yankees-Guardians games.

Despite all of their scoring, the Yankees’ O/U record for the season is 33-41-3. Five of their last seven games have gone Under the total. Cole’s last three starts have each resulted in the total going Under. Civale is the opposite. Civale has started nine games so far in 2022. Eight of them have resulted in the total going Over. Seven of those totals were in the double digits.