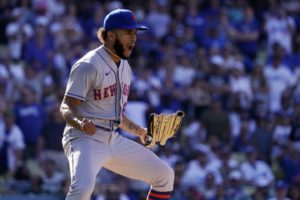 The New York Mets continue their West Coast road trip with a visit to Petco Park to take on the San Diego Padres. The Mets split four games with the Dodgers over the weekend. New York won the final two games scoring 14 runs in the process after scoring just once in the first two games. It’s that Mets offense that could be the difference tonight.

The Padres struggle against right-handed pitching and the Mets will put Carlos Carrasco on the mound tonight. Carrasco has become the Mets top pitcher with the injuries to Jacob deGrom and Max Scherzer. Carrasco is 6-1 and has a 3.47 ERA. He has won each of his last three starts and the Mets are 6-2 in his last eight starts overall. In his last start, Carrasco pitched five innings of shutout baseball and struck out five as the Mets beat Washington 5-0.

San Diego has the sixth-lowest wRC+ against right-handed pitching, but they are coming off a rather impressive series win over the Milwaukee Brewers. The Padres recorded two shutouts and won three of four games by a combined 21-9. Manny Machado leads San Diego with a .333 batting average and nine homers and 32 RBIs. Getting Fernando Tatis Jr. back in the lineup would be a huge boost. Tatis has yet to play this season because of a wrist injury.

The Mets are now 8-2 SU in their last 10 games. The two wins over the Dodgers are the Mets only two road wins in their last six trips away from home. New York is 4-1 SU in its last five games against the Padres. Tonight’s game will be the first of six the Mets and Padres will play this season. They will play three games this week and three more in late July.

San Diego will start Blake Snell who is having a tough season thus far. He is 0-2 with a 4.80 ERA. The former AL Cy Young award winner has had some control issues. He has a 13.3 walk percentage so far this season and the Padres have lost all three of his starts. The Mets are one of the top-scoring teams in the majors so far this season. The Mets average 5.11 runs per game which is third overall.

With their offense, the Mets trend Over. Their O/U record for the season is 28-24-4. Nine of the Mets’ last 13 games have resulted in the Over and the total has gone Over in 13 of the last 20 games against the Padres on the road in San Diego. Petco Park is ranked the second most pitcher-friendly ballpark in the majors.