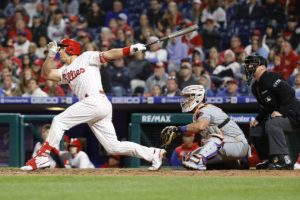 So far in 2022, the Philadelphia Phillies are 2-4 against the New York Mets. They are .500 against everyone else which is why they are off to a subpar 11-14 start. They will face the Mets for the third time of this young season and they will put one of their best pitchers – Aaron Nola – on the mound.

The problem for Philadelphia is that Nola has already started against the Mets twice this season. He’s lost both times. As a result, Nola’s off to a 1-3 start this season though his pitching numbers aren’t all that bad. In his last start, which was against the Mets, he pitched six innings and struck out nine. He did give up three earned runs though and the Mets lost 3-0. For the season, Nola’s ERA is 3.90.

Nola will face a Mets lineup that is scarier on paper right now than on the field. The Mets went to great lengths to build a powerhouse lineup. They succeeded and New York is one of the best teams in baseball right now. Their hitters have had glimpses of their potential and they have done enough to get the Mets off to an 18-9 start this season.

Former NL Rookie of the Year Pete Alonso has five homers and 21 RBIs, but he’s hitting .260. Francisco Lindor has four home runs and 15 RBIs, but he’s hitting .243. Second baseman Jeff McNeil has been the Mets’ best hitter with a .337 average thus far. None of the Mets’ hitters are ripping the cover off the ball, but they are doing enough right now.

The Phillies, like the Mets, made some key offseason moves namely bringing in Nick Castellanos and Kyle Schwarber. While Schwarber has a team-high seven homers, he’s also hitting just .193. Castellanos is the Phillies’ best at the plate with a .307 average, three homers and 12 RBIs. Philadelphia has struggled lately though losing four of its last five games. Two of those losses came in their last series against the Mets.