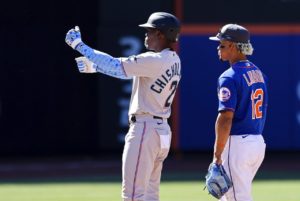 The Mets are coming off an impressive two-game sweep of the Subway Series beating the Yankees in consecutive games. New York has given itself some cushion in the NL East standings and became the second NL team to win 60 games. Now, the Mets begin a weekend series with division rival Miami. The Mets are 10-5 SU in their last 15 games against the Marlins, but Miami always has a chance to win any time Sandy Alcantara is on the mound.

Alcantara is the favorite to win the NL Cy Young award right now. He is 9-4 with the best ERA in the NL at 1.81. Among his four losses this season is one against the Mets. Alcantara had back-to-back starts against New York back in June winning the first and losing the second. In that loss, Alcantara gave up four earned runs. That was one of only two times he has given up four or more earned runs.

The Marlins have won four of Alcantara’s last five starts. In those five trips to the mound, the Miami ace pitched a total of 38 innings and allowed six earned runs. One of the reasons why Alcantara has four losses is an inconsistent Marlins lineup. That lineup has been really struggling without star Jazz Chisholm. The Marlins shortstop is on the 60-day injured list with a back problem.

Chris Bassitt will start for the Mets. He has been very good in July. In three starts so far this month, Bassitt’s ERA is 2.33. The issue for Bassitt is that he hasn’t received the necessary run support. The Mets lost two of those July starts. In his last start, Bassitt pitched seven innings, gave up two earned runs, and struck out 11. The Mets lost to San Diego 2-1.

Bassitt is 7-7 with a 3.63 ERA for the season. He has three starts against the Marlins this season. In a weird twist, all three starts were consecutive. The Mets won one and lost two of Bassitt’s starts. Bassitt pitched well enough to win going at least six innings in all three starts. He allowed three earned runs in two of the games and two more in the other. The Mets failed to score more than two runs in each of the two losses.

The Marlins have won four of their last ten games. Miami is just 1-4 SU in its last five games at home. The Marlins are 24th in runs per game (4.03). The Under is 6-2-2 in the Marlins’ last 10 games at home against a right-handed starting pitcher. Alcantara’s last start against Pittsburgh went Over – due to extra innings and bad Pirates pitching – but the previous three had final scores of 2-1, 2-0, and 2-1.