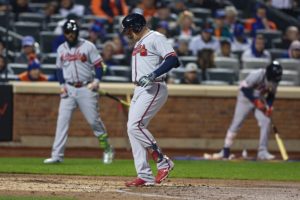 It’s a matchup of aces in Atlanta as New York’s Max Scherzer takes on the Braves’ Max Fried. It will be just the second start for Scherzer since returning from the injured list. He is 5-1 this season with a 2.26 ERA and he looked exactly like himself in his first start after the injury. He pitched six scoreless innings and struck out 11 batters against Cincinnati. His teammates would end up losing 1-0. Tonight, Scherzer will face a much tougher Atlanta lineup.

The Braves are the third-highest scoring team in the majors averaging 4.78 runs per game. In their last series with Washington, Atlanta scored 20 runs in three games. Over their last 10 games, the Braves are averaging 5.4 runs a game and they have won eight of those ten. The closest lineup to Atlanta that Scherzer has faced is Philadelphia, which the Mets ace has gone up against three times. In back-to-back starts in early May, Scherzer allowed four and three earned runs to the Phillies. Those two starts plus his season-opening start against Washington are the only ones in which Scherzer has given up more than one earned run.

For Atlanta, Fried has been just as dominant with a 9-2 record and a 2.52 ERA. He has won each of his last two starts pitching a total of 13 runs against Cincinnati and St. Louis and allowing just one earned run. Atlanta has won Fried’s last nine starts in a row. Only once did Fried allow more than two earned runs in those nine starts and he allowed 12 total across 58.1 innings. Fried does have one previous start against the Mets this season. He pitched six innings back in early May and gave up two earned runs in a 5-2 Atlanta victory.

The Mets offense, which is tied with Philadelphia for fifth in runs per game (4.76), has cooled off a bit. They got shutout last night by Miami’s Sandy Alcantara and the Mets have scored two or fewer runs in six of their last 13 games. The Mets are coming off a split of four games with Miami over the weekend.

With their weekend sweep of Washington, the Braves are now 6-1 SU in their last seven games and 8-2 SU over their last ten. The Braves have beaten the Mets four times in the last six games between the two teams. In the last five Mets-Braves games in Atlanta, the home team is 4-1 SU.

Tonight’s total is set at 7 and for good reason. Neither pitcher gives up very many runs. The Under has hit in three of Fried’s last four starts. It’s the same for Scherzer – three Unders in the last four starts. The total has gone Under eight of Atlanta’s last nine games and nine of the last 10 that the Braves played at home. The total has gone Over in four of the Mets’ last six games on the road.