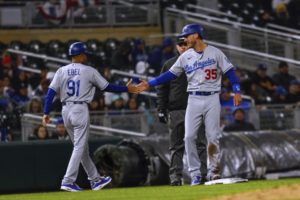 It’s a battle of two first-place teams in Los Angeles tonight, but the Twins and Dodgers couldn’t be any more different. The Dodgers are 75-33 and have the best record in baseball. They have won eight straight games and are coming off a four-game sweep of rival San Francisco followed by a three-game sweep of San Diego over the weekend. That gives L.A. a 15.5-game lead over the Padres in the NL West Division.

Minnesota leads the AL Central by one game over Cleveland. The Twins are just 57-51, which is worse than the Padres’ second-place record in the NL West. The Twins split four games with Toronto over the weekend losing the final game on a controversial call at the plate. Minnesota catcher Gary Sanchez was called for illegally blocking the plate on a play at home. The run was allowed and it was the difference in a 3-2 loss to the Blue Jays.

The Twins will go with right-hander Joe Ryan who is 8-4 with a 3.67 ERA this season. Ryan was on a roll winning three of four starts and allowing just five earned runs across 22 innings before he ran into the San Diego Padres on July 29. Ryan gave up 10 earned runs in 4.2 innings. He did, however, follow that up with a five-inning, one-run outing against Detroit last week. That gave Ryan two wins in his last three starts. The problem is that both wins were against the Tigers.

The Twins will also have to deal with one of the best pitching staffs in baseball. Tonight, Julio Urias takes the hill for L.A. Urias has been solid all season, but he has been at his best since the All-Star break. He is 3-0 with a 0.95 ERA and 0.79 WHIP in three starts since the break. He has allowed opposing hitters a .188 batting average. That gives Urias eight wins in his last nine starts dating back to June 18. His ERA over that period is 2.28.

The Dodgers tied their longest winning streak of the season at eight with their win over San Diego on Sunday. Since a loss on June 28, the Dodgers are 30-5. They are also 15-2 SU in their last 17 games at home and 5-1 in their last six games against the Twins at home.

Minnesota is 5-5 in its last ten games and is barely holding onto the AL Central lead. As mentioned, Cleveland is one game behind, and the Chicago White Sox trail by just two games. Minnesota has lost its last eight games against the Dodgers.