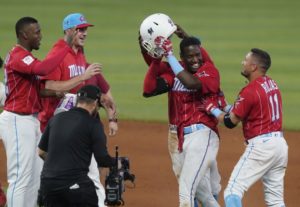 The Cardinals started this series off with a bang on Monday recording a 9-0 victory over the Marlins. It was the Cardinals’ 10th win in their last 14 home games. Miami has struggled recently and is now 33-39 and in fourth place in the NL East. The Marlins are 13 games out of first place and five games behind third-place Philadelphia.

Paul Goldschmidt is the leading candidate for the NL MVP right now. He is batting .347 with 19 home runs and 64 RBIs. Teammate Nolan Arenado is having an All-Star caliber season of his own hitting .278 with 14 homers and 49 RBIs. The Cardinals are now just a half-game behind the Brewers in the NL Central Division.

The Cardinals will start Dakota Hudson (5-4, 3.72) who has lost two of his last three starts. Last time out, Hudson gave up five earned runs to Milwaukee in a 6-4 loss. St. Louis has lost three of Hudson’s last four starts, but he has more experience than Garrett.

Miami has really struggled on the road this season. They are only 14-23 in road games this season and have lost five of their last six away from home. It’s even worse in their recent trips to St. Louis. Miami is 1-9 in its last 10 games at St. Louis. In the last ten games overall against the Cardinals, the Marlins are only averaging 1.2 runs per game. In the last eight games between the two teams, St. Louis has shutout the Marlins four times.

Miami ranks 15th in the majors in runs per game scoring 4.39. On the road, that number dips a little to 4.11. Over their last ten games, Miami is averaging 3.6 runs per game and they have been shut out twice – last night’s 9-0 loss and a 6-0 defeat at the hands of the Mets.

Despite its lack of scoring, Miami has a 38-33-1 O/U record. St. Louis trends Over too with a 39-33-4 O/U mark. Pitching success against the Marlins has led to six of the last seven head-to-head meetings going Under the total. Miami has scored 0, 1, or 2 runs in nine of the last ten matchups. Miami scored five runs in a 5-0 win back in April.

All four of Garrett’s starts this season have resulted in the Under. Hudson’s last three starts have gone Over the total with each game scoring double-digit runs (10, 13, 13).