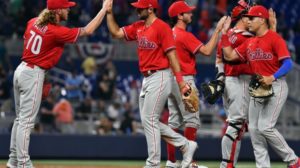 Both Miami and Philadelphia have been on a roll recently. The Marlins won five in a row before missing out on a sweep of Houston on Sunday. The Phillies swept the Angels and Brewers before taking two of three from Arizona. Philadelphia lost on Sunday to the D-Backs to end a nine-game winning streak. They have been playing better since firing manager Joe Girardi. Now, the two teams meet with a strong pitching matchup.

Miami’s Sandy Alcantara has been having himself a year. He is 6-2 in 12 starts this season and currently has the second-best ERA in the majors at 1.61. He is coming off a complete-game shutout of Washington and hasn’t given up an earned run in his last two starts which cover a total of 16 innings. Miami has won each of Alcantara’s last six starts as he has allowed zero or one earned run in each. Miami’s ace has allowed no more than two earned runs in all but one of his starts this season.

Philadelphia’s Aaron Nola can’t compete in the ERA department, but he is fourth in MLB in strikeouts with 85. Nola is 4-4 with a 3.50 ERA and the Phillies have won his last three starts in a row. Nola is also coming off a rather impressive start his last time out. He pitched eight innings of shutout baseball in a 10-0 win over Milwaukee. Nola gave up four hits and struck out six.

The one thing that could be an issue for Nola is his propensity to give up the long ball. The Phillies pitcher has allowed 10 home runs this season. He has given up a homer in eight of his 12 starts this season. Seven of the home runs have come while pitching at home. Twice Nola has allowed multiple homers. Miami certainly isn’t a power at the plate, but Jorge Soler and Jazz Chisholm Jr. each have 12 home runs so far this season. It’s worth noting that Chisholm is one of just two players in MLB this season that has double-digit homers as well as double-digit steals.

Despite scoring just one run in yesterday’s loss to Arizona, the Phillies are averaging 6.5 runs a game over their last ten. Philadelphia is now fifth in MLB in scoring averaging 4.82 runs per game. Miami is 10th at 4.52. It’s no surprise that both teams trend Over. The total has gone Over in eight of Miami’s last 12 games and in nine of the Phillies’ last 11. The Over is 7-1 in Philadelphia’s last eight home games and the Over has hit in four of the last five Marlins-Phillies games.

Over each starting pitcher’s last three starts, Alcantara and Nola have combined to allow just seven earned runs across 46.1 innings. Alcantara has allowed one earned run in his last 24 innings. Nola has given up six in 22.1. Five of those six came against the Giants, a game that Nola won 6-5.