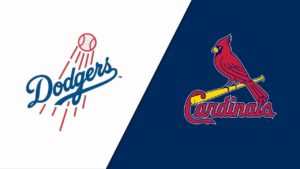 While the Yankees are tearing up the American League, the Dodgers are doing the same in National League. Los Angeles has the second-best winning percentage (tied with Houston) in MLB and begins a series on the road in St. Louis tonight. Road games have been no problem for the Dodgers lately. In fact, L.A. has been rolling for nearly a month.

Since June 21, the Dodgers are 16-4, including a 6-3 road record during that span. For the season, the Dodgers are 26-16 away from home. L.A. is also 17-11 against left-handed starting pitchers. Tonight, they will get St. Louis lefty Matthew Liberatore. Over the course of their last 10 games, L.A. is 9-1 and has outscored its opponents by +1.9 runs.

Liberatore is 2-1 with a 4.74 ERA this season. He has only made six starts so far, but the Cardinals have won five of them. What’s interesting is that Liberatore has given up four or five earned runs in three of his starts and zero runs in the other three. His last time out, Liberatore pitched four scoreless innings against Atlanta. The Cardinals won 3-2.

The Dodgers will go with Mitch White who, like Liberatore, has only started a handful (seven) of games this season. White is 0-1 with a 3.38 ERA so far. In his last trip to the mound, he pitched 5.2 innings against Colorado. White allowed one hit, no earned runs, and struck out six as the Dodgers won 2-1.L.A. has won each of White’s last two starts as he has allowed just one earned run over 10.1 innings.

In the ten games St. Louis has played in July so far, nine of them have gone Under. That’s not surprising given the Cardinals are scoring 2.4 runs per game over that span. The Dodgers also lean Under with four of their last six games going Under the total. The Under is 2-6-2 in the Dodgers’ last ten games and the team’s O/U record for the season is 32-45-8. That mark is 14-24-4 in road games this season.