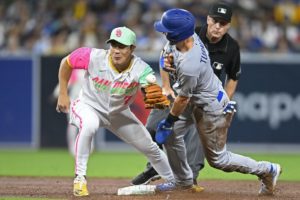 Its competition with NL West leader Los Angeles has been a season-long thing. San Diego triumphed on Tuesday night with a walk-off, 10-inning, 4-3 victory. On their sixth — and possibly not their last — attempt of the year, the Padres now have a chance to win their first series against the Dodgers.

San Diego’s chances of making the playoffs were enhanced on two fronts by the Padres’ victory on Tuesday and the losses suffered by Philadelphia and Milwaukee. The Padres now hold a 2.5-game advantage over the Phillies in the race for the second wild-card slot in the National League. San Diego has a four-game lead over the Brewers in the battle for the third spot.

The magic number for the Padres (86-68) to clinch a playoff spot is four. In the middle game of their three-game series in San Diego on Wednesday night, they will attempt to lower that number when they take on the team with the best record in baseball – the Dodgers (106-48).

Los Angeles will start left-hander Julio Urias who is 17-7 with an outstanding 2.25 ERA this season. In all of Urias’ starts this season, the Dodgers have a 20-9 record. In his last five games, the Dodgers are 5-0, with Urias currently riding a four-game winning streak. The Dodgers are 16-1, and he has a 14-1 record over his last 17 starts.

Urias is 3-0 in three starts against the Padres this year and he has a 2.00 ERA against them. He has given up four runs on nine hits along with eight walks while striking out 13 batters in 18 innings against San Diego. In 14 games (nine starts) over his career against San Diego, Urias is 6-1 with a 2.43 ERA.

The Padres will counter with right-hander Joe Musgrove. He is 10-7 with a 3.12 ERA this season. Musgrove recently displayed the form that let him finish his first 12 outings of this season 8-0 with a 1.59 ERA. Despite a mid-season slump, San Diego is 18-10 in Musgrove’s 28 starts this season. He had started the 2022 campaign with an 11-1 record after his first 12 starts.

In his last two outings, Musgrove has pitched 11 innings and allowed just one run on nine hits along with two walks and 12 strikeouts. This season, Musgrove has had trouble pitching against the Dodgers. He has lost both of his outings against L.A. and has a 5.11 ERA. In 12.1 innings, he has thrown 15 strikeouts while surrendering seven runs on 11 hits and two walks. Musgrove has served up four home runs to the Dodgers. Musgrove has faced Los Angeles 11 times (eight starts) in his career, going 0-6 with a 4.50 ERA.