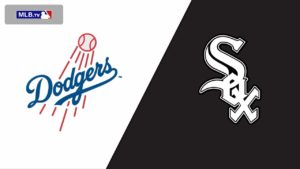 The Dodgers are the World Series favorite, but they have only won two of their last seven games. After an off day yesterday, Los Angeles faces the perfect opponent to get back on track. The White Sox are just 3-6 in their last nine games and they have underperformed all season long. Chicago was favored to win the AL Central but they are now in third place in the division. At 25-27, the White Sox are five games out of first place.

To try and get back on the right side of things, the White Sox will put Michael Kopech on the mound tonight. Kopech has pitched well this season. He just hasn’t received the support he needs. Kopech is 2-2 with a 2.20 ERA in nine starts so far. He is coming off his worst start of the season. Last week, Kopech lasted just three innings while surrendering six hits and five earned runs. He also walked four batters in a 7-3 loss to Toronto.

The problem for Kopech is that he will face a Dodgers lineup that is as good as any in MLB. Los Angeles leads the majors in runs per game (5.37). They also rank first in walks, slugging percentage, OPS, and total bases. The Dodgers are also in the top-5 in hits, doubles, triples, home runs, stolen bases, batting average, and on-base percentage. If Kopech isn’t on top of his game, the Dodgers have the ability to send him to the bench early.

The White Sox will have the opportunity to provide support for Kopech. Chicago will face Dodgers right-hander Mitch White. He has appeared in eight games for L.A., three of them as a starter. White is 0-1 and sports a 4.79 ERA. In his last start against Pittsburgh, he went five innings which is the longest he’s pitched this year. He gave up three earned runs and the Dodgers lost 8-4. The total went Over in each of White’s three starts this year.

White will face a White Sox offense that has struggled this season. Chicago ranks just 27th in runs per game scoring 3.65. The White Sox also rank 27th in OPS (0.656). Chicago has had to fight through some injuries this season. Eloy Jiminez has only played in 11 games and is batting .222. Tim Anderson will also miss today’s game. He’s the White Sox best hitter at .356.

Despite the Dodgers’ recent struggles, they are 4-1 SU in their last five games against the White Sox. L.A. is also 6-1 SU in its last seven road games. The total has gone Over in six of Chicago’s last seven games. The Over is also the trend in Dodgers-White Sox games with 10 of the last 15 going Over. In four of the last five Dodgers games against the White Sox played in Chicago, the total has also gone Over.