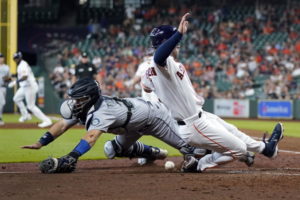 Tonight’s game in Seattle will be the tale of two pitchers who are essentially opposites. Seattle’s Chris Flexen is 1-6 with a 4.98 ERA. Last season, he pitched extremely well at home at T-Mobile Park. It’s not going so well in 2022. Flexen’s home ERA is 5.00 and he has allowed 20 hits in 18 innings pitching at home. Plus, Flexen will face a Houston lineup that bats .275 against him. That could be trouble.

On the other side, the Astros will put their ace on the mound. Justin Verlander may be 39 years old, but he appears to be in his prime. After missing the entire 2021 season recovering from Tommy John surgery, Verlander is off to a great start in 2022. He is 6-1 with an MLB-leading 1.22 ERA. Verlander is in the midst of a 19-inning scoreless streak. He hasn’t given up a run since May 4 in a game against these same Seattle Mariners.

Verlander has faced Seattle twice this season and Houston has won both games – 4-0 and 7-2. In those two starts, the Astros ace has pitched 14.2 innings, allowed eight hits, and just two runs. The game Verlander started at T-Mobile Park was a gem. He pitched eight scoreless innings, scattered three hits, and struck out eight.

In road games this season, Verlander is 4-1 with an ERA of just 0.55. His strikeout rate of 28.4 percent is higher on the road (22.8 percent at home) and Verlander has allowed only 13 hits in 33 innings pitching away from home. Against Verlander, this Seattle lineup has a .188 batting average and a 24.6 percent strikeout rate.

Seattle has lost the last five games that Flexen has started. It’s not a strong Mariners lineup that will back up Flexen. Seattle ranks 22nd in runs per game (3.96). The Mariners have won just one of their last seven games. They lost four straight to Boston in last weekend’s series and then dropped two of three to Oakland to start this week.

Seattle’s pitching is going to be tough to overcome. Flexen has not been the pitcher he was in 2021. When he gives way to the Mariners bullpen, it could get even worse. Seattle relievers have the eighth-worst opponent batting average. On the other end, Houston has the best bullpen ERA in the majors. In Verlander’s last three starts, the Astros have allowed just one run. All three games were Houston victories.