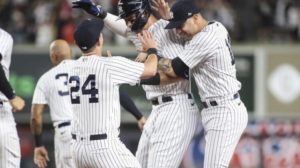 Tonight’s Astros-Yankees matchup features one of the better pitching matchups in the majors this season. Houston’s Justin Verlander has battled back from Tommy John surgery which forced him to miss all of the 2021 season. He’s 8-3 so far this season with a 2.30 ERA. He will face New York’s Luis Severino who is 4-1 with a 3.27 ERA in 12 starts so far in 2022. Severino is even better than his numbers suggest.

The Yankees right-hander had a rough go in his last start. He allowed only three hits, but Severino wound up giving up five runs. He had some control issues and walked four batters in a game against Toronto. Still, Severino managed to strike out nine Blue Jays. That gives him 29 strikeouts in his last three starts. Severino also has an xERA of 2.65. That suggests that he is only going to get better as this season progresses.

Similar to Severino, Verlander had his worst start of the season last time out. The Houston veteran appeared almost unhittable in his first 12 starts of the season. The White Sox got to Verlander early and often last week as they managed seven runs, four earned, against the Astros star. Verlander would last just 3.2 innings. That may be a cause for concern as the Yankees are absolutely crushing the ball right now.

Over the last 15 days, New York ranks first in MLB in both slugging percentage and OPS. The Yankees have scored at least four runs in each of their last seven games. Not to be outdone though, the Astros are averaging 6.1 runs per game over their last ten. Houston has scored at least four runs in eight of its last ten games. The Astros were even shutout once and still managed to average over six runs.

Both pitchers have been Under machines for their respective teams this year. The Under is 4-1 in Severino’s last five starts. In his last three starts at Yankee Stadium, the average total is 3.67 runs. Verlander has been equally impressive. The Under is 5-2-1 in his last eight starts. The average total in those eight games was 7.18, which is less than tonight’s total of 7.5.

When the starters give way to the bullpens, these are two of the best in the majors. Over the past two weeks, New York ranks third in bullpen ERA and Houston ranks seventh.