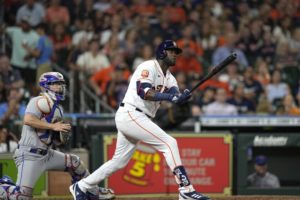 Houston is getting used to New York. Last week, they took two games at home against the Mets then went to the Big Apple and split four games with the Yankees. That’s a 4-2 mark against both New York teams which, by the way, have the best records in their respective leagues. Now, the Astros meet the Mets again but this time in New York.

Sandwiched around those two losses in Houston was a pair of 2-1 series wins over Miami. The Mets would love nothing more than to repay the Astros with a pair of wins in this two-game series. Carlos Carrasco, who started one of the two games against Houston last week, will get the start. Carrasco was roughed up in that start. He lasted just 2.1 innings after giving up three home runs and five earned runs. Carrasco sports an 8-3 record but has lost two of his last three starts. His ERA is 4.31 and for the month of June, that number is 5.33 across five starts.

Framber Valdez (7-3, 2.90) gets the start for Houston. His last start came against the Yankees. He gave up three earned runs in six innings. Houston went on to lose that game 7-6. The Astros have won seven of Valdez’s last nine starts. The two losses have come in his last three starts.

One of the areas where Houston has an advantage over the Mets is in the bullpen. Valdez has pitched at least six innings in his last 11 starts. When he heads to the dugout, he will turn it over to the best bullpen in baseball. Houston’s relievers have a collective ERA of just 2.75. They will also benefit from a day off on Monday.

The Astros (45-27) lead the AL West by 10 games. They have won eight of their last 11 games and playing on the road hasn’t made much of a difference. The Astros are 10-4 SU in their last 14 games away from home. Houston is tied with the Dodgers for the most road wins – 25 – this season. The Astros have also had recent success against the Mets. In addition to those two wins last week, the Astros are 5-0 SU in the last five games against New York.