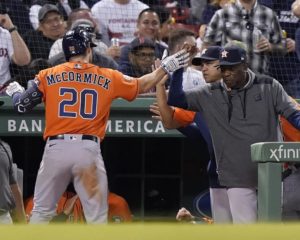 Neither Houston nor Boston has gotten off to a great start in 2022. The Astros have started to pick it up and are now neck and neck with the Los Angeles Angels in the AL West. Boston (14-21) is just a half-game ahead of last-place Baltimore in the AL East.

Tonight, the two teams face off at Fenway after a 6-3 Red Sox win in the first game of the series. Game 2 will feature two of the better pitchers on either roster. Nathan Eovaldi is 1-1 with a 3.15 ERA, but his last two starts were shaky. He allowed three earned runs in each start and Boston lost to Atlanta and the Chicago White Sox. Also troublesome is the fact that Boston has only won two of Eovaldi’s seven starts.

On the other side, Jose Urquidy is 2-1 with a 4.40 ERA. Houston has given Urquidy some serious run support in his last three starts, all Astros wins. In wins over Toronto and Minnesota, Houston plated 11 runs in each game. Urquidy’s ERA is not ideal, but it is coming down. He has allowed just one earned run in his last two starts.

What has helped Houston win 12 of its last 14 games is coming to life of their powerful lineup. The Astros aren’t quite to the level of their 2021 numbers, but they have been improving. Houston is 12th in runs per game (4.28), but over their last ten games they are averaging 5.5 per game. In a recent three-game sweep of Minnesota, Houston scored 21 runs. Then, the Astros took two of three from Washington scoring 20 runs in the process.

Boston has struggled at the plate this season. Aside from a few outbursts like a recent 11-3 and 7-1 wins over Texas, Boston has been inconsistent at the plate. The Red Sox rank in the bottom ten in runs scored and in OPS. It’s hard to believe this is possible with Xander Bogaerts, Rafael Devers, and new addition Trevor Story in the lineup. Boston has been shut out numerous times this season and they have far too many one- and two-run games.

As mentioned, Houston has won 12 of its last 14 games and now 13 of its last 20 against Boston. The Astros are 5-2 SU in their last seven games on the road. With last night’s win, Boston has now won four of its last six games. They are struggling at Fenway Park recently. Boston is just 1-5 SU in its last six home games.

The total has gone Under in 14 of Houston’s last 20 games. In the series between these two teams, the Over has been the trend. In the last nine games between Houston and Boston, the Over has hit seven times. The Over is 5-1 in the last six head-to-head meetings at Fenway Park.