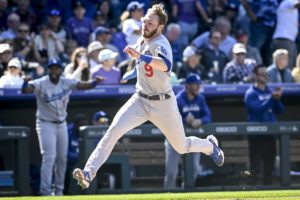 The Dodgers beat Colorado last night 5-3 to pick up their 50th win of the season. L.A. became the second National League team to hit that mark as the Mets also hit the number last night. Tonight, the Dodgers look to continue paying back the Rockies for last week’s series. Colorado won two of three against L.A. at home last week. The Dodgers will go with Mitch White to start. He is just 0-1 with a 3.93 ERA, but he can be effective.

White was effective in his last start, which lasted 4.2 innings. He held San Diego to just one earned run and the Dodgers went on to win 3-1. White also has the league’s seventh-best bullpen behind him to shut down the Rockies in the later innings of the game.

The Dodgers are counting on White to be just effective enough. L.A. will go up against Rockies pitcher German Marquez. The Colorado right-hander is 4-6 with a 5.89 ERA. Marquez is struggling and he’ll have to face a Dodgers lineup that just rocked him in his last start. Last week, Marquez gave up five earned runs in just 3.1 innings against the Dodgers. L.A. would go on to win 8-4.

Marquez has been inconsistent as well. In his start prior to the Dodgers, he went 7.2 innings, gave up just three hits and didn’t allow a single earned run. Then, in the start before that one, Marquez allowed eight hits and four earned runs to San Diego. Prior to the loss to Los Angeles last week, the Rockies had won Marquez’s last five starts in a row.

The Dodgers will give Marquez all he can handle. They have the best OPS in baseball and they have scored the second-most runs. They remain tied with the Yankees in runs per game – 5.04 – which leads the majors. Plus, L.A. now has Mookie Betts back in the lineup. In his first game back in the Dodgers lineup, Betts went 2-for-3 with two doubles. Betts and the rest of the Dodgers are going to be an issue for Marquez.

Los Angeles is now 5-1 SU in its last six games and 4-1 SU in its last five at home. The Dodgers have not fared well against the Rockies recently. Colorado has beaten L.A. in four of the last six head-to-head meetings. Where the Rockies struggle though is on the road. They are just 1-6 SU in their last seven road games. That gives them a season total record of 12-24 in away games.

The last game against L.A. with Marquez on the mound resulted in 12 total runs. Betts is back in the Dodgers lineup followed in the batting order by Trea Turner and Freddie Freeman, who have the third- and fourth-most hits in MLB. The Rockies trend Over – 39-35-6 – for the season, but five of the last six Rockies-Dodgers games played in Los Angeles have ended up going Under the total.