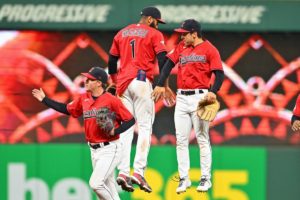 The New York Yankees and Cleveland Guardians meet tonight in a deciding Game 5 to determine who will advance to the American League Championship Series. After a day off and then a rainout on Thursday, the two teams will play for the fourth consecutive day. Jameson Taillon will start for the Yankees against Aaron Civale for Cleveland in what may end up being a bullpen game for both groups.

The teams worked out in the sun on Wednesday instead of playing Game 2 after New York won Game 1 of the series 4-1 on Tuesday. After Game 2 was postponed the following day due to severe rain, the teams played three consecutive tight games to set up the deciding fifth game.  This will be the third Game 5 played between the two teams. In 1997, Cleveland won Game 5, and the Yankees did so in 2017.

Oscar Gonzalez’s game-tying single off Taillon in the 10th inning helped Cleveland win 4-2 and even the series on Friday. Gonzalez’s bases-loaded single on Saturday gave Cleveland a 6-5 victory. The Yankees had been one strike away from a win. Harrison Bader hit a two-run home run to give the Yankees a 4-2 victory and stave off elimination. Gerrit Cole pitched seven innings and Bader now has three homers in the series.

After facing three batters in the 10th inning on Friday and failing to retire any of them, Taillon will get the ball for his first career postseason start. In 32 starts during the regular season, Taillon went 14-5 with a 3.91 ERA and 177 1/3 innings pitched. The Yankees are looking for a repeat of his Sept. 27 performance against the Blue Jays, when he pitched for 7.1 innings and gave up just two runs on seven hits.

In three starts versus Cleveland in his career, Taillon is 1-2 with a 3.94 ERA. On April 22 at New York, the right-hander faced them for five innings, giving up one run, seven hits, and no walks while striking out one.

Civale is making his first start since Oct. 5 against Kansas City when he struck out nine and gave up just two runs in six innings. Civale went 5-6 with a 4.92 ERA in 20 starts during the regular season. Civale lost his final three starts of the regular season despite spending time this season on the injured list.

In two starts against the Yankees during the regular season, Civale was 0-2 with a 10.00 ERA. On April 24 at New York, he was hit for six runs in three innings. On July 2 in Cleveland, he gave up four runs in six innings.