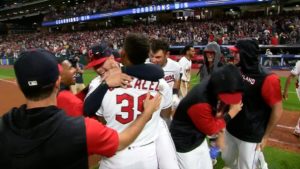 The Dodgers are coming off two impressive wins over the Angels. Those two wins came after getting swept by San Francisco in the previous series. Los Angeles is slumping at the plate where they have scored just 10 runs in their last five games. The Dodgers do have a lineup that is scary though. That could be a problem for Cleveland starter Zach Plesac.

Plesac is 2-4 with a 4.70 ERA. In his last start, Plesac gave up three earned runs in a loss to Oakland which is one of the worst offensive teams in baseball. Plus, Plesac’s numbers point to some negative regression. In comparison to his ERA, Plesac’s xERA is 6.07 which is an indication that Plesac has been getting lucky. He has a low strikeout rate and a high barrel percentage, which means that very soon an offense – like the Dodgers – is going to push Plesac’s ERA closer to his xERA.

From top to bottom, the Dodgers lineup is solid. Mookie Betts is having an MVP-caliber year hitting .273 with 17 homers and 40 RBIs. Trea Turner has had long hitting streaks and is batting .298. Former NL MVP Freddie Freeman is hitting .286 as is LF Gavin Lux. Don’t forget, the Dodgers also roll with Justin Turner, Will Smith, Max Muncy, and former NL MVP Cody Bellinger. That will make it a tough night for Plesac.

Three-time Cy Young winner Clayton Kershaw will start for the Dodgers. He went four innings in his first start since coming back to the lineup on June 11. Kershaw allowed two earned runs in a loss to the Giants. He also allowed two walks in that game and went deep into the pitch count with each batter. Kershaw is 4-1 with a 2.12 ERA so far this season.

The Dodgers may have struggled recently, but they have done well against the American League recently. In their last 12 games against AL opponents, the Dodgers are 10-2 SU. They are also 17-3 SU in their last 20 against teams from the AL Central.

The Dodgers lean Under for the season with a 25-33-4 O/U record. Four of their last five games have gone Under the total. In their last six home games, the total has gone Under four times. In the series with Cleveland, however, the total has gone Over in four of the last six games played at Dodger Stadium. Cleveland’s O/U record is 29-27-3 for the season and the Over has hit in 10 of the last 12 Guardians games played on a Friday night on the road.