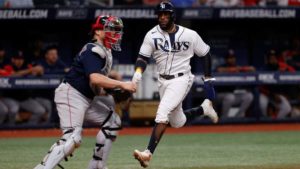 For the first time this season, Boston will have Chris Sale on the mound. Sale last pitched in the postseason last year. One of his last three starts last year was against Tampa Bay in the playoffs. Sale probably hopes tonight goes nothing like that one. He pitched just one inning and gave up five earned runs. The Red Sox did end up winning that game 14-6.

Boston and Tampa Bay are separated by just a half-game in the AL East standings. The Red Sox (47-40) have one more win than the Rays (46-40). Both teams have had their share of struggles recently. Tampa Bay somehow managed to get swept by Cincinnati over the weekend and they are just 6-5 in July. Boston is just 2-5 SU in its last seven games, but they are coming off a split of a four-game series against the Yankees.

The two teams played just last week and Tampa Bay won two of three. The Rays took the first game of this series last night with a 10-5 victory. It was a rare outburst of run production from Tampa Bay, which ranks 22nd in MLB in runs per game (4.19). In three games against Cincinnati over the weekend, the Rays scored a total of 10 runs. The Rays have also allowed five or more runs in each of their last three games. Starter Corey Kluber will be tasked with slowing down one of baseball’s hottest offenses.

Kluber did exactly that just last week when he pitched six scoreless innings against Boston in a 7-1 Tampa Bay victory. Kluber, who is 4-5 with a 3.62 ERA this season, gave up just three hits and struck out five. The Rays have now won two of his last three starts. Earlier in the season, Boston did tag Kluber for 11 hits and four earned runs in a 4-3 Red Sox win.

With the win last night, Tampa Bay has now beaten Boston five times in the last six head-to-head meetings. The Rays have now won eight of their last 12 games at home and six of their last seven against an American League opponent. The Red Sox have had a tough stretch of games lately facing AL East opponents in their last three series. In their last 18 division games, Boston hasn’t fared well. The Red Sox are 6-12 SU in those 18 games.

Each of Boston’s last five games has gone Over the total. Prior to last night’s loss to the Rays, the Red Sox played four games against the Yankees. Their games totaled 11, 17, 11, and 17 runs. For the season though, Boston has trended Under. The Red Sox have a 37-41-9 O/U record this season. That mark is 17-21-6 on the road this year.

In the Rays-Red Sox series, the Under has been the play recently. Five of the last seven games have gone Under and six of the last eight games played in Tampa Bay have done the same.