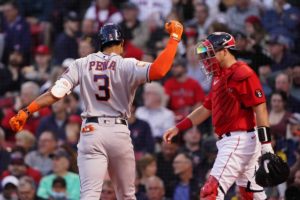 The Houston Astros’ win probability for the AL West is 99.9 percent. The Astros upped their division lead over Seattle to 12 games with six wins in seven games over the Mariners over the last 10 days. Now, Houston will host Boston, a team that has watched the 2022 season slip away. The Red Sox, who just completed a 10-game homestand in which they went 3-7, are now in last place in the AL East. It won’t get any easier tonight as they send starting pitcher Nathan Eovaldi to the mound.

Eovaldi could be a trade prospect for Boston, but before Tuesday’s trade deadline he will start against the Astros. That could be bad news for the Red Sox. Eovaldi’s July was a complete disaster. In three starts, Eovaldi went 0-1 with an eye-opening ERA of 11.08. He was the starting pitcher against Toronto in a game that ended with a score of 28-5. In those three starts in July, Eovaldi gave up 16 earned runs in 13 innings.

Tonight, he will face a Houston lineup that has a .358 batting average against him. The top of the Astros’ batting order, which includes Jose Altuve, Yuli Gurriel, AL MVP candidate Yordan Alvarez, and Alex Bregman, has a combined .464 batting average against Eovaldi. Plus, the Red Sox right-hander has one start against Houston this season. It didn’t go well. Eovaldi gave up nine runs in 1.2 innings in 13-4 loss to the Astros back in May.

Eovaldi will go up against Houston right-hander Luis Garcia, who had a five-game winning streak snapped in his last start. The Astros have won six of Garcia’s last seven starts and that includes a win over the Mets and a pair of victories over the Yankees. Garcia is 8-6 with a 3.81 ERA and a 3.37 xERA. He is 1-1 with a 3.27 ERA in two career starts against Boston. He did face the Red Sox earlier this season and gave up three earned runs in a 5-1 loss back in May.

The Astros are 8-4 over their last 12 games. They have won five of their last six games at home. The Red Sox continue their downward spiral. Boston is just 4-13 SU in its last 17 games and 6-17 over their last 23. They are 1-6 in their last seven games on the road and 2-4 in the last six against the Astros.

The Over is 13-7 in Boston’s last 20 games and 8-3 in the last 11 Red Sox-Astros games. Houston happens to be the most profitable Under team in MLB with a 37-60-5 O/U record. It’s important to note that the Boston bullpen has had its share of struggles in the second half of the season. Since the All-Star break, the Red Sox relievers have the worst ERA in the majors and they rank 21st in FIP. The Under is 8-3 in the last 11 Red Sox-Astros games in Houston.