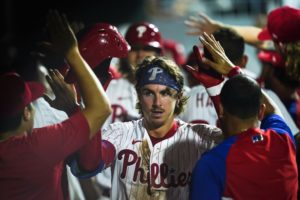 The Phillies snapped a three-game losing streak and beat Atlanta 6-4 last night in the first game of this three-game series with the Braves. Atlanta, which has been on fire since June 1, is not just 6-4 over its last ten games. The Braves are still in a great spot as they are just two games behind the New York Mets in the NL East standings. Philadelphia is seven games behind the Braves and nine games out of first place.

Tonight’s matchup could have more of a pitcher’s duel feel as young Spencer Strider takes the mound for Atlanta against Aaron Nola of the Phillies. Strider has been in the Braves rotation since May and in 10 starts so far this season is 3-2 with a 3.42 ERA. In the month of July, his ERA is 3.05 with a WHIP of 0.97. Strider did struggle in his last start, which came against Washington. In four innings, he allowed five earned runs and took the loss to the Nationals.

Despite a 6-7 record, one could argue that Nola has been the Phillies’ most consistent starter. His ERA is 3.13 with a WHIP of 0.91 in 19 starts this season. His last start was probably the best of the season. Nola pitched 8.1 innings without allowing a run and struck out 10 in a 4-0 win over Miami. Now, in his two previous starts – both losses – he gave up eight earned runs. Like Strider, one of those losses was to Washington.

With the win last night, the Phillies are now 1-3 SU in their last four games. Philadelphia is 2-4 SU in its last six games at home. With their scoring down, the Phillies have seen the total go Under in 10 of their last 15 games. Last night’s total went Over, which has been the trend in games against the Braves. In the last eight games against Atlanta, the Over is 6-2 now.

Both of tonight’s starting pitchers have sub-1.00 WHIPs. Strider has allowed 0 or 1 earned run in three of his last four starts and Nola pitched that beauty against Miami in his last start. That is reflected in tonight’s total of 7.5.