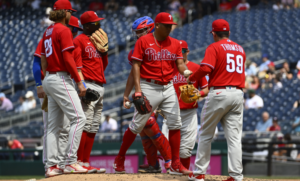 The Braves started right where they left off before the All-Star break and took two of three games from the Angels over the weekend. Tonight, ace left-hander Max Fried will start against a Phillies team still trying to figure out what happened over last weekend. Philadelphia got swept in three games by the Chicago Cubs, who are battling the Reds for last place in the NL Central.

The Phillies lost three games to Chicago by a combined 25-7. That’s a far cry from the three-game sweep of Miami that happened right before the All-Star break. Now, the Phillies have to face the red-hot Braves who have been proving why they are a favorite to repeat as World Series champion. Since June 1, Atlanta is 35-12 and the Braves are now just 1.5 games behind the New York Mets in the NL East standings.

Fried will start for the 20th time this season. He is 10-3 overall with a 2.64 ERA. Atlanta has won 10 of his last 11 starts. Fried has won three of his last four starts with the only loss coming to the Mets. He has one start against Philadelphia this season. It came back in May and Fried tossed six innings and allowed two earned runs in a 6-5 Braves win. In his young MLB career, Fried is 4-3 with a 3.90 ERA against the Phillies over nine starts and 15 total innings.

The Phillies will counter with Ranger Suarez who is 7-5 with a 4.07 ERA this season. In three starts and 12 career games against the Braves, Suarez is 1-2 with a 5.04 ERA. Lately, the Phillies left-hander has had some success. He has won two of his last three starts. In his last one, Suarez didn’t allow a single run in five innings and picked up the win over Miami. He also pitched 7.1 innings allowing two earned runs in a 6-2 win over San Diego.

His lone loss in his last three starts came against Atlanta on June 29. Suarez pitched 6.2 innings and gave up four earned runs. The Braves won 4-1. In the last ten games against Atlanta, the Phillies have won just three times. Philadelphia is also just 3-7 SU in its last ten games overall. Playing at home hasn’t made much of a difference either as the Phillies are 1-4 SU in their last five games at Citizens Bank Park. For the season, Philadelphia is 24-24 at home.

The Braves have won their last six games in a row. Atlanta is 38-17 in their last 55 games against a left-handed starting pitcher. The Over is 6-0 in the Braves’ last six games and it is 5-2 in the last seven games between Atlanta and Philadelphia. In the Phillies’ last 14 games, the Under has hit in 10 of them. The Phillies have played well against division teams lately. Philadelphia is 6-1 SU in their last seven against opponents from the NL East.