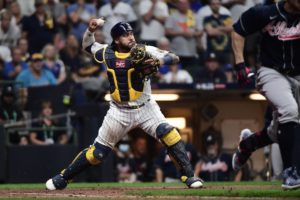 The defending World Series champion Braves are still below .500 (16-19) after a 7-3 loss to San Diego yesterday. Today, they travel to Milwaukee to begin a three-game series with the Brewers. Milwaukee is 22-13 and sits atop the National League Central division. Atlanta has been giving up a lot of runs as of late. The Braves actually rank 24th in the majors in runs allowed per game (4.50). Over their last three games, Atlanta gave up 6.33 runs per game.

Giving up runs against a team like Milwaukee could be a problem. The Brewers are coming off a very impressive 7-3 win over the Marlins on Sunday. Milwaukee has been hitting the ball extremely well. The Brewers are seventh in MLB averaging 4.82 runs per game. Rowdy Tellez leads the team with 29 RBIs, which is just four less than the best in the majors. Willy Adames (24 RBIs) and Christian Yelich (20 RBIs) are also hitting well.

The Braves will start Ian Anderson on the mound. Anderson is 3-1 so far this season and hasn’t suffered a loss since his first outing of the season. The Braves have won four of his six starts including his last, a 5-3 win over Boston. Anderson allowed seven hits and three earned runs over 5.1 innings but was not involved in the decision. He won his previous two starts allowing a combined three earned runs against the Mets and Rangers. One area of concern for Atlanta and Anderson is his WHIP of 1.59 in his first two starts in May.

Freddy Peralta will go for his third straight win for Milwaukee. The Brewers right-hander went 5.2 innings against the Reds in his last start. He allowed just four hits and one earned run and struck out eight. Peralta’s two wins in a row were both against Cincinnati, which is the worst team in the majors. On May 4, Peralta got plenty of run support as the Brewers ended up winning 18-4. Peralta has a 4.40 ERA and a 1.26 WHIP in his 28.2 innings of work so far this season.

The Braves took two of three from the Brewers in a series during the first week of May. Atlanta then split two games with Boston and dropped two of three to San Diego over the weekend. Atlanta is actually 5-1 SU in its last six games against the Brewers.