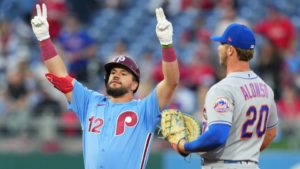 New York Mets slugger Pete Alonso goes for his third straight Home Run Derby tonight as the 2022 MLB All-Star game festivities get underway. Alonso, believe it or not, has made more money winning the Home Run Derby than he has from his Mets salary. He’ll get another chance at taking home the $1 million prize tonight, but he’ll have to fend off a pretty solid field.

Alonso won the HR Derby as a rookie in 2019 when he was making $555K. The pandemic shut down the All-Star game and all related activities in 2020 and then Alonso returned to win the event again last year. Alonso’s 2021 salary? A mere $677K, but he is earning $7.4 million this season. Still, a nice $1 million check would be nice for the Mets star.

Once again, there are eight participants. They are seeded by their 2022 home run totals heading into the All-Star break. That leaves Alonso as the No. 2 seed behind Philadelphia’s Kyle Schwarber. There are three rounds of competition. The winner in each round advances.

Hitters get three minutes to hit as many home runs as possible in the first two rounds. In the final round, hitters get two minutes. In each of the first two rounds, a batter may take a 45-second timeout. All batters get 30 seconds of bonus time at the end of each round. For any home run of 440 feet or longer, a batter receives an additional 30 seconds of bonus time.

Schwarber leads the majors with 29 homers and he gets the top seed in tonight’s contest. The Phillies slugger is given +330 odds to win tonight. He has 10 multiple-homer games so far this season. Schwarber is paired up with No. 8 seed Albert Pujols.

No one in tonight’s event has more major league home runs than Pujols, who has hit 685 dingers in his storied career. Pujols is batting .215 and only has six homers this season, but he’s got plenty of power. He is listed at +1600.

As mentioned, Alonso is the overall favorite at +225. As the second seed, Alonso will battle Atlanta’s Ronald Acuna Jr. (+550). This will be a rematch of the 2019 HR Derby semifinals. Alonso is tied for fifth in MLB with 24 homers. Acuna, who came back from last year’s knee injury, has eight home runs so far this season.

The Rest of the Field

Texas SS Corey Seager is in the top ten this season with 22 homers. He is the No. 3 seed and he will face the favorite to win the AL Rookie of the Year, Seattle’s Julio Rodriguez.

Seager is given +850 odds to win tonight. Rodriguez, who is batting .275, has 16 dingers this season and he is listed right behind Seager on the board at +1100.

The other first-round matchup pits Cleveland’s Jose Ramirez (No. 5) against Washington’s Juan Soto (No. 4). Soto hit a 520-foot homer in last year’s HR Derby. The Washington star, who just recently rejected a huge contract offer from the Nationals, has 20 homers so far this season and he is given +650 odds to win tonight. The switch-hitting Ramirez has 19 home runs this season and is listed at +1300 for tonight.