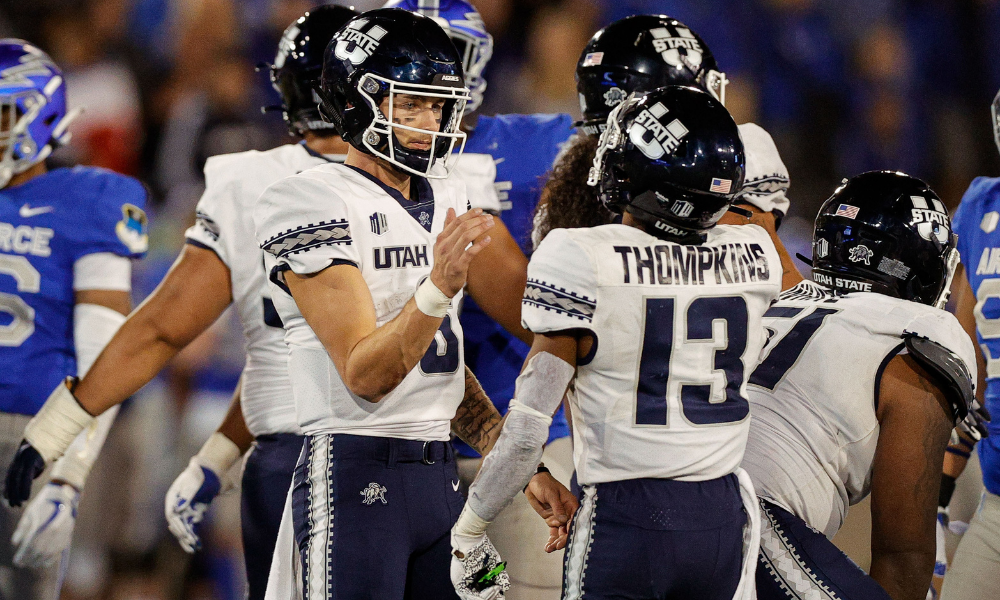 No. 13 BYU stays in-state and travels to Logan to face 3-1 Utah State in the battle for the Wagon Wheel. The Cougars are surprisingly good a year after losing QB Zach Wilson to the NFL and look to go 5-0 for the second consecutive season. Jaren Hall, who has thrown for 561 yards and seven touchdowns, has done an admirable job of replacing Wilson, but it has been the BYU defense that has really been the difference.

Last year, the Cougars’ defense finished fourth in the nation in scoring defense (15.3 ppg) and tenth in total defense (317.4 ypg). Returning all three linebackers and a corner from that defense, the Cougars picked up where they left off in 2020. The numbers are a bit higher, but the results have been the same. Plus, BYU has a pair of impressive wins over ranked Power 5 teams – No. 21 Utah and No. 19 Arizona State.

The Cougars offense, while not the 43.5-point-per-game machine of a year ago, has done enough to win games. As mentioned, Hall has done a good job of replacing Wilson. The question prior to tonight’s game is whether Hall will play or not. He is banged up and Baylor Romney stepped in last week against South Florida and looked like a veteran.

Romney completed 20-of-25 passes for 305 yards and three touchdowns in BYU’s 35-27 win over the Bulls. The best of his touchdown passes was his last, a 47-yarder to his brother Gunner. It came at the 5:40 mark of the third quarter and put BYU ahead 35-13. Regardless of who plays quarterback for BYU tonight, the offense will be in good hands.

Utah State’s offense is in good hands too. QB Logan Bonner leads an Aggies offense that averages 533.3 total yards and 31.5 points per game. Bonner has thrown for 959 yards and seven touchdowns so far this season. He played his worst game of the season last week in a 27-3 loss to Boise State. Bonner was just 11-of-25 for 173 yards and he threw two interceptions. He’ll have to be at his best if Utah State is to have a chance tonight.

Utah State also does not fare well when playing teams ranked in the AP poll. The Aggies are 5-62 all-time in games against ranked opponents. BYU at No. 13 will be the highest-ranked team to visit the Aggies since a No. 6 Boise state played at Maverik Stadium in 2009.