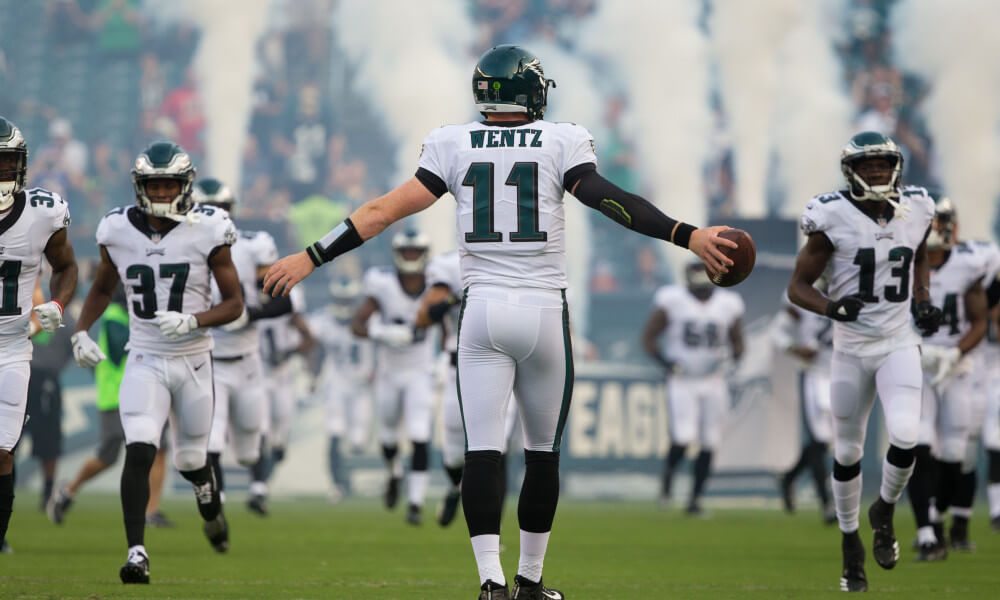 Thank you for stopping by Oskeim Sports’ Blog for today’s free sports pick in the NFL game between the Philadelphia Eagles and Carolina Panthers. We hope you enjoy the betting analysis and free sports pick below.

Philadelphia possesses a potent attack that is averaging 27.4 points and 398 total yards per game at 6.0 yards per play against teams that would combine to allow 5.6 yards per play to a mediocre offense.

The Eagles can beat you on the ground (139 rushing yards per game at 4.5 yards per rush attempt) and through the air (7.3 yards per pass attempt with a 62.1% completion rate).

I like the fact that the Eagles are 2-1 SU and ATS on the road where they are averaging 25.3 points and 405 total yards per game at 4.6 yards per rush attempt, 7.2 yards per pass attempt and 6.1 yards per play.

Philadelphia head coach Doug Pederson will likely keep the ball on the ground against a suspect Carolina front seven that has been 0.2 yards per rush attempt worse than average in 2017.

Carolina is allowing opposing running backs to average 4.4 yards per rush attempt at home, while quarterbacks are completing 72.2% of their pass attempts against the Panthers’ secondary.  However, Carolina’s stop unit rates 0.4 yards per play better than average overall from the line of scrimmage.

The Eagles are coming off the most dominating performance of any team in Week Five.  Carson Wentz averaged 9.6 yards per pass play in Philadelphia’s 34-7 win over the Cardinals.  Wentz’s rapid development has been the catalyst behind the Eagles’ offensive success this season.

My only concern with Wentz is the fact that he will not have Lane Johnson on the field tonight (sidelined with a concussion).  I’m interested in seeing how the second-year quarterback handles Carolina’s 10th-rated pass defense.  Wentz has not faced a secondary this good since Week One against the Redskins.

However, Cam Newton finally looks healthy and has posted back-to-back strong outings, including averaging 9.3 yards per pass play against the Lions last week.  Newton will face pressure from the Eagles’ front seven and won’t have much time to throw downfield from the pocket.

In fact, Philadelphia is currently 12th in the league with twelve sacks this season.  Newton also holds onto the ball longer than most NFL quarterbacks, ranking 14th out of 32 qualified quarterbacks in most seconds before a pass.

Finally, my math model actually favors Philadelphia by 0.4 points so we are getting excellent line value on the live underdog.  Take the Philadelphia Eagles plus the points as Oskeim Sports’ Free Sports Pick for Thursday, October 12.

If you are looking for premium sports picks, be sure to visit the online store where you’ll find Oskeim’s award-winning subscriptions.