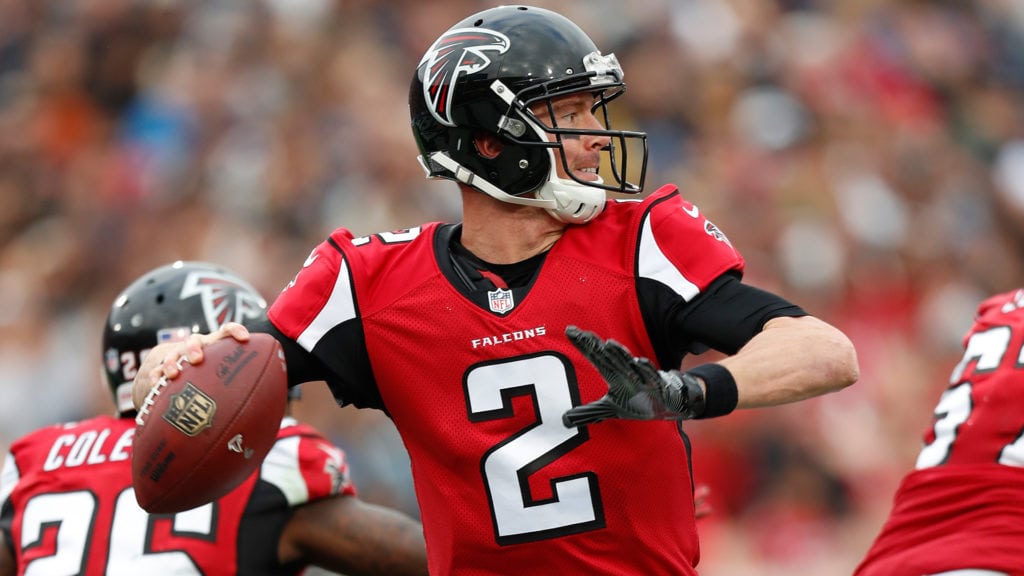 Oskeim Sports previews Sunday’s NFL game between the Carolina Panthers and Atlanta Falcons.  Oskeim recommends laying the points with the Falcons as one of his free NFL picks for September 16.

Oskeim also recommends laying the points with the New Orleans Saints as one of his free NFL picks.  Be sure to visit Oskeim’s Blog daily for more free NFL picks, award-winning betting advice and industry-leading educational content.

The most curious offseason decision was made in Carolina where the Panthers retained the services of offensive coordinator Norv Turner. Turner has enjoyed past success with well-known pocket passers like Troy Aikman and Phillip Rivers but Cam Newton is the antithesis of a pocket passer.

Indeed, Newton has ranked 25th or lower out of 37 qualifying quarterbacks over the past two seasons in completion rate, yards per attempt, interceptions, passer rating and total QBR.

Newton’s passer rating from a clean pocket last season was just 87.1, which ranked 31st in the NFL and was ten points below the league average. Newton’s accuracy has always been problematic and last year was no exception. He overthrew his intended target 9.2 percent of the time when standing in a clean pocket, which was the highest rate in the NFL.

Newton has averaged more than 118 rushing attempts per season in his NFL career; Turner has only coached one quarterback (Doug Flutie in 2001) who had more than 50 rushing attempts in a season. Needless to say, I don’t foresee a mutually-beneficial relationship between Turner and Newton as the 2018-19 season progresses.

I also don’t understand why the Panthers would hire Turner based on his declining results on the field. His offenses ranked 16th, 21st and 26th over the past three years in Minnesota, following a 26th-place finish in Cleveland. Hiring Turner was one of the worst decisions I have witnessed in the past ten years, and the results will speak for themselves when the Panthers miss the playoffs.

The Panthers also recovered more than 63 percent of fumbles last season, the fourth-highest rate in football. Regression is looming in Carolina as turnover luck is a highly volatile metric predicated on randomness.

Carolina was decimated by injuries in its 16-8 win over the Cowboys last week. Tight end Greg Olsen fractured his right foot and is out indefinitely, while right tackle Daryl Williams suffered a torn MCL and dislocated his right patella (what a great game, huh?). Olsen was the first tight end in NFL history to have three consecutive 1,000-yard seasons (2014-16) and will be replaced by rookie Ian Thomas.

The Panthers are also without left tackle Matt Kalil (knee), and right guard Trai Turner (concussion) has not practiced this week and is unlikely to see the field on Sunday. Tackle Chris Clark was signed on Wednesday and could have the unenviable task of blocking Falcons defensive end Vic Beasley, Jr.

Atlanta’s defense has taken a hit as linebacker Deion Jones was placed on injured reserve with a foot injury, while safety Keanu Neal suffered a season-ending knee injury. Jones led the Falcons with nine tackles and had an interception in last week’s 18-12 loss to Philadelphia.

From a technical standpoint, Atlanta is a perfect 9-0 ATS since January 2, 2011 as a divisional favorite following a straight-up loss. The Falcons have covered the point spread by more than nine points per game in those contests.

Quarterback Matt Ryan is 9-1 SU and ATS in home openers while the Falcons are a perfect 8-0 SU and ATS at home in Game Two of the regular season. Let’s also note that Ryan is 17-11 ATS following a loss versus teams with a better record, including 5-1 ATS at home against division foes.

Finally, Matt Ryan was victimized by bad luck last season. In fact, Ryan threw a league-leading eight “unlucky interceptions (tipped passes, receiver errors, etc.) but finished third in adjusted completion percentage and threw only five turnover-worthy passes all year. Ryan has an upgraded offense to work with and second-year coordinator Steve Sarkisian improved in the second half of last season.

Lay the points with the Falcons as one of Oskeim Sports’ Free NFL picks for Sunday and invest with confidence.