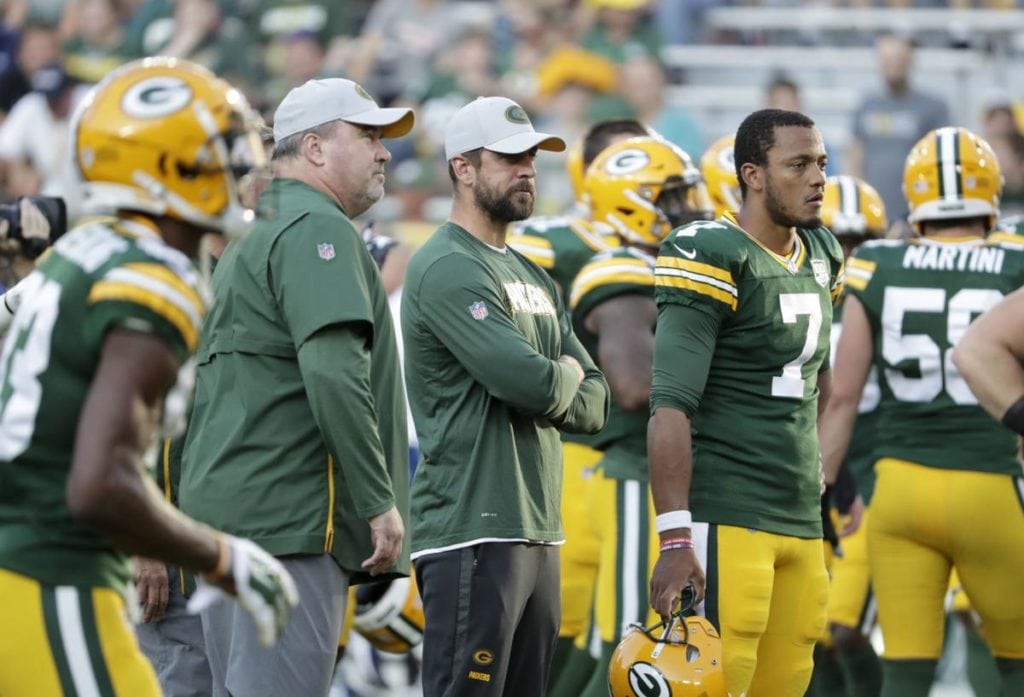 On Thursday, August 16, Oskeim Sports previews the NFL preseason game between the Pittsburgh Steelers and Green Bay Packers.  Oskeim recommends laying the points with the Packers as one of his free NFL picks for Thursday.

Green Bay starting quarterback Aaron Rodgers was taking the first reps in both team periods with the No. 1 offense in practice this week, which indicates that the veteran is going to see the field in tonight’s game against the Steelers.

Rodgers has made it known that he wants to play tonight. In fact, he “expects” to play and is excited to see live action in front of the home faithful at Lambeau Field for the first time since Week 4 of last year’s regular season. “I haven’t played at home for a long time,” Rodgers said. “So it will be nice to get out on Lambeau.”

I expect an extremely focused effort from Green Bay’s offense after Rodgers referred to last week’s practices as being “piss poor.” “I hope we’re not that soft,” Rodgers said Monday. “I hope we can hear comments or read comments and not get offended by things. It’s a professional environment; it’s not a personal environment. I care about winning, No. 1, and I’m going to say and do the things that I feel like can advance us.”

Last year, Rodgers played one series in Week 2 of the preseason, throwing a 3-yard touchdown pass to Martellus Bennett at the end of a 15-play drive.

Green Bay has to be pleased with the development of rookie wide receivers Marquez Valdes-Scantling (fifth-round), who had five catches for 101 yards and a touchdown in Week One and Equanimeous St. Brown (sixth round), who finished with four receptions for 61 yards.

Valdes-Scantling took Rodgers’ practice criticism to heart and I expect another solid performance from him tonight. “You know, when the leader says you’ve got to pick it up, that’s what you do,” Valdes-Scantling said. “He’s one of the greatest to ever do it, so whatever he says, we have to go out and do it.”

Having Rodgers’ full offensive line intact for tonight’s game gives offensive coordinator Joe Philbin the ability to throw the ball without having to worry about his star quarterback’s health.

Let’s also note that Green Bay’s attack accumulated 445 total yards last week, the third-highest total in Week One. The Packers also outscored Tennessee 24-7 in the second half, which speaks volumes about how talented Green Bay’s second and third-units are.

In contrast, Pittsburgh is a money-burning 2-8 ATS in its last ten preseason clashes with NFC North foes, 1-6 ATS in its previous seven preseason games following an upset win, 3-7 ATS in preseason road affairs, 4-9 ATS as preseason underdogs, 1-4 ATS following a preseason win and 1-6-1 ATS in exhibition play over the past two years.

I also like the fact that Green Bay is an 80% ATS winning proposition in Week Two of the preseason, while the Steelers are a 66.7% ATS losing wager.

Lay the points with the Packers as one of Oskeim Sports’ free NFL picks for Thursday.

Be sure to visit Oskeim’s award-winning Blog on a regular basis for more winning free NFL picks!  Oskeim’s free NFL picks have produced a win rate of 55.1% since 2007.