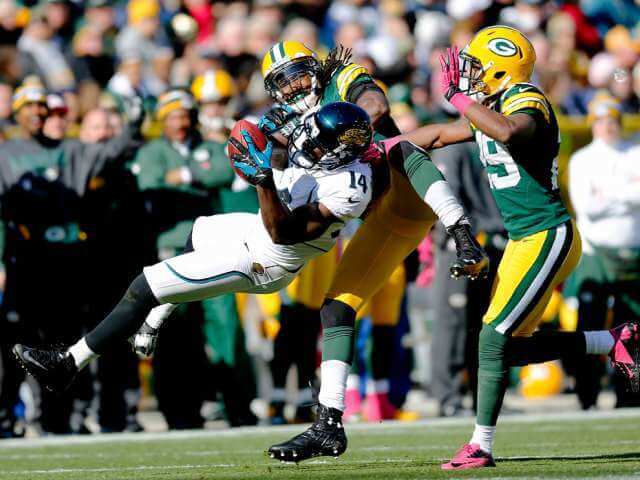 Jacksonville’s offense is poised to have a very productive season behind quarterback Blake Bortles, who ranked seventh in the NFL with 4,428 passing yards and second with 35 touchdowns in 2015. Bortles has an elite wide receiving unit consisting of Allen Robinson, Allen Hurns and Marquise Lee, while running back Chris Ivory joins T.J. Yeldon in the backfield.

Lee has been hampered by hamstring injuries over the last two NFL seasons (missed 9 games), but he was the Jaguars’ most impressive player during the offseason and appears 100% healthy.  Tight end Julius Thomas is another weapon at Bortles’ disposal on Sundays.

Bortles should have success moving the chains through the air against a Green Bay secondary lacking depth with the suspensions of Mike Pennell and Demetri Goodson.  The Jaguars also revamped their defense with a strong draft that included cornerback Jalen Ramsey and linebacker Myles Jack.

The front office wasn’t shy in spending money via NFL free agency either, bringing in defensive tackle Malik Jackson, safety Tashaun Gipson, cornerback Prince Amukamara and others at a price tag of $220 million.

Look for defensive end Dante Fowler, Jr., the 2015 first-round pick who missed his rookie season with a torn ACL, to have a breakout campaign as he was one of the most talented defenders coming out of the Draft last year.  Defensive coordinator Todd Walsh implored him to watch more game film during the preseason and reports indicate that Fowler is spending more time in meetings and in the film room.

Green Bay will once again have a potent offense, but quarterback Aaron Rodgers is coming off the worst NFL season of his career and wide receiver Jordy Nelson is coming back from an ACL tear and didn’t play a single snap in the preseason.  The more concerning issue is the Packers’ offensive line after ownership refused to pay All-Pro guard Josh Sitton.

Sitton is now with the Bears and will be replaced by Lane Taylor, who has made two career starts in his four-year NFL career.  Green Bay is also missing starting center Corey Linsley, who is on the PUP list for at least six games.

Take the Jaguars to make a statement in their season-opener as Oskeim Sports’ Free NFL Best Bet for Sunday, September 11.