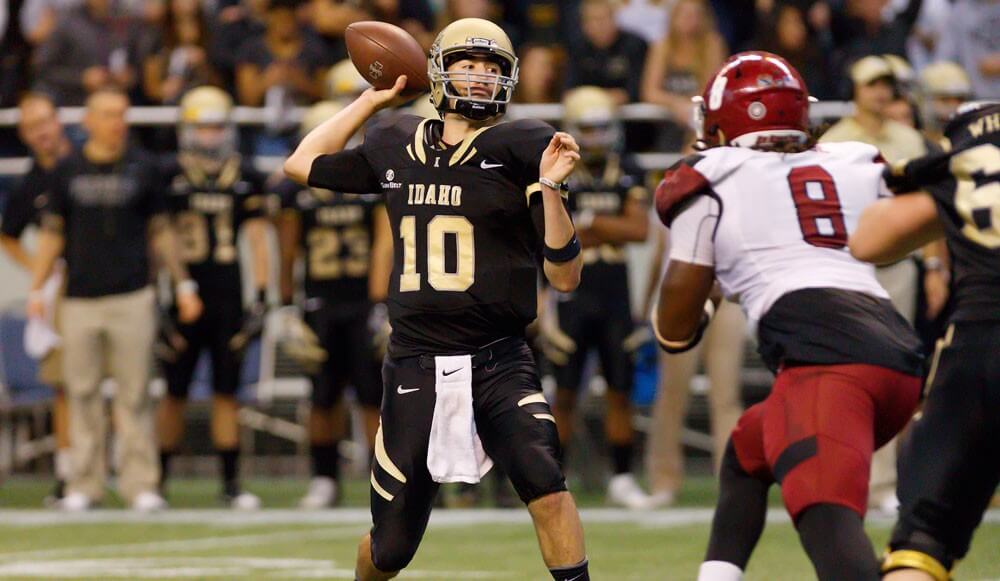 Oskeim Sports breaks down the college football game between Louisiana-Lafayette and Idaho on Saturday, October 7.  Oskeim also provides a free NCAA Football Pick in the game.

The Vandals proceeded to upset Colorado State in the Famous Idaho Potato Bowl as 14-point underdogs. Idaho entered the 2017 campaign with continuity within the coaching staff as offensive coordinator Kris Cinkovich returned for his fourth season in Moscow, while defensive coordinator Mike Breske entered his third season under Petrino.

Idaho’s offense has improved in each of Petrino’s first four years in Moscow, but this year’s unit welcomed back just five starters. However, the two most significant skill positions are anchored by outstanding talent, including senior quarterback Matt Linehan, who threw for 3,184 yards with a 61.9% completion rate in 2016.

Overall, Linehan and his receiving corp. own a significant 2.7 yards per pass attempt advantage over Lafayette’s inept secondary (I actually re-ran the numbers because I couldn’t believe how bad Lafayette’s pass defense was).

How bad is Lafayette’s defense? The Cajuns gave up 514 total yards to FCS foe SE Louisiana at home in Week One, rating 1.8 yards per play worse than average. I don’t see a scenario under which Lafayette will be able to stop Idaho’s aerial attack in this game.

This game is a complete mismatch from the line of scrimmage but, unfortunately, the betting market quickly adjusted to reflect Idaho’s substantial advantage by moving the opening line of -3 to -7 within 36 hours. Despite the four-point line swing, solid value remains with the Vandals who are favored by double-digits by both of my math models.

The possibility of Idaho scoring 28+ points against the Ragin’ Cajuns’ defense is a near certainty, which is significant in that the Vandals are a perfect 10-0 ATS in games in which they score 28 points or more over the last two seasons.

If you are looking for another quality and free NCAA Football Pick, please visit Oskeim’s Blog on a daily basis.