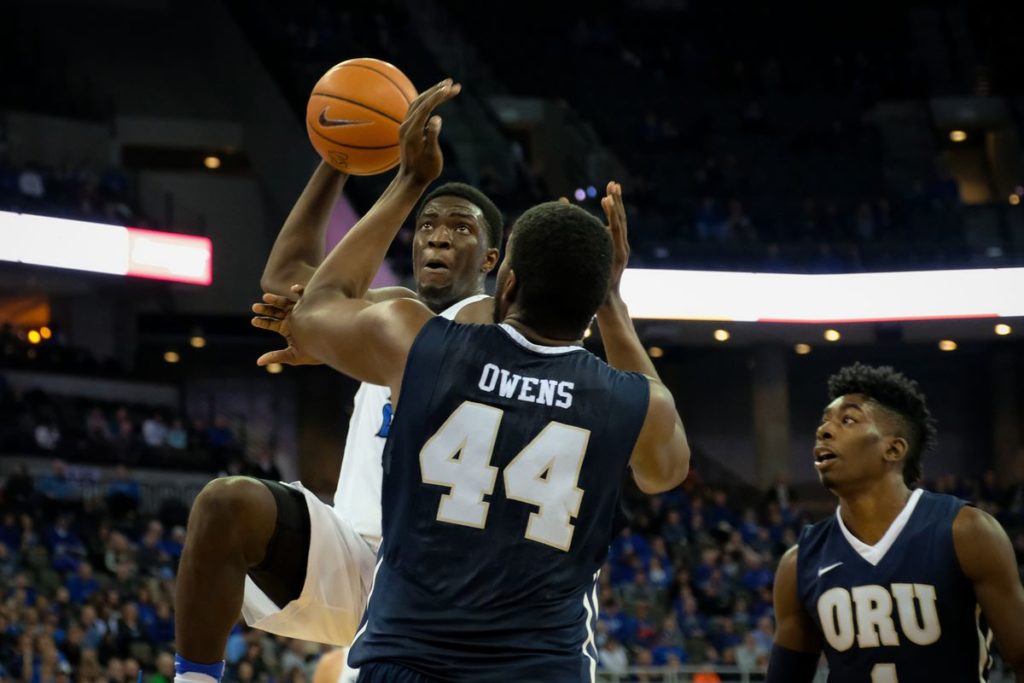 Oskeim Sports previews Sunday’s NCAA basketball game between Oral Roberts and Denver.  Oskeim recommends grabbing the inflated number with the Golden Eagles as one of his free NCAA basketball picks for January 20.

My math model only favors Denver by 3.08 points and the Golden Eagles are a perfect 6-0 ATS in their last six games versus .499 or worse opposition. The underdog is 6-1-1 ATS in the previous eight meetings in this series and Denver enters the game having lost six of its last seven games, including being upset at home against North Dakota.

The Pioneers have really struggled on the defensive end of the floor where they are allowing 77.0 points per game on 47.2% shooting from the field and 41.0% from beyond the arc to teams that would combine to average just 73.6 points per game against a mediocre defense.

Those defensive woes have only gotten worse in conference play where Denver is yielding 77.2 points per game on 48.5% shooting from the floor and 42.9% from three-point territory.

Meanwhile, Oral Roberts arrives in town with an offense that is averaging 77.2 points per game on 48.1% shooting from the field and 40.8% from three-point territory in conference play. The Golden Eagles’ attack is led by junior forward Emmanuel Nzekwesi, who is averaging team-highs in both points (15.4) and rebounds (8.4) per game.

Nzekwesi is joined in the frontcourt by redshirt freshman Kevin Obanor, who is second on the team in both points (12.2) and rebounds (6.6) per game. Obanor is an outstanding rebounder who is also capable of extending the floor (61.0% FG%).

Oral Roberts’ deep frontcourt is enhanced by the production of freshman D.J. Weaver, who is third on the team with 9.8 points per game. Weaver was a top 50 recruit as a freshman and was a part of the USA Basketball program. The 6-8 forward provides the Golden Eagles with a legitimate threat from beyond the arc where he is shooting 45.4% this season.

Oral Roberts’ backcourt is anchored by junior college guard Sam Kearns, who was part of the Golden Eagles’ eight-man rotation under first-year head coach Paul Mills in 2017-18. Kearns averaged over ten points per game in a strong debut for the Eagles last season and is currently averaging 8.3 points per game in 2018-19.

The junior guard shot 53 percent from beyond the arc in junior college and is currently knocking down 40.7 percent of this three-pointers this season.

Mills has a lot more depth and versatility in his sophomore season on the sidelines and brought in junior college Aidan Saunders to provide Kearns with additional help in the backcourt. Mills calls Saunders the “second-best athlete on the team” and the 6-4 junior has provided excellent minutes off the bench.

Finally, Denver continues to be overvalued by the betting market as the Pioneers are just 5-11-1 ATS in their last seventeen games. Grab the points with the Golden Eagles as one of Oskeim Sports’ Free NCAA Basketball picks for January 20.