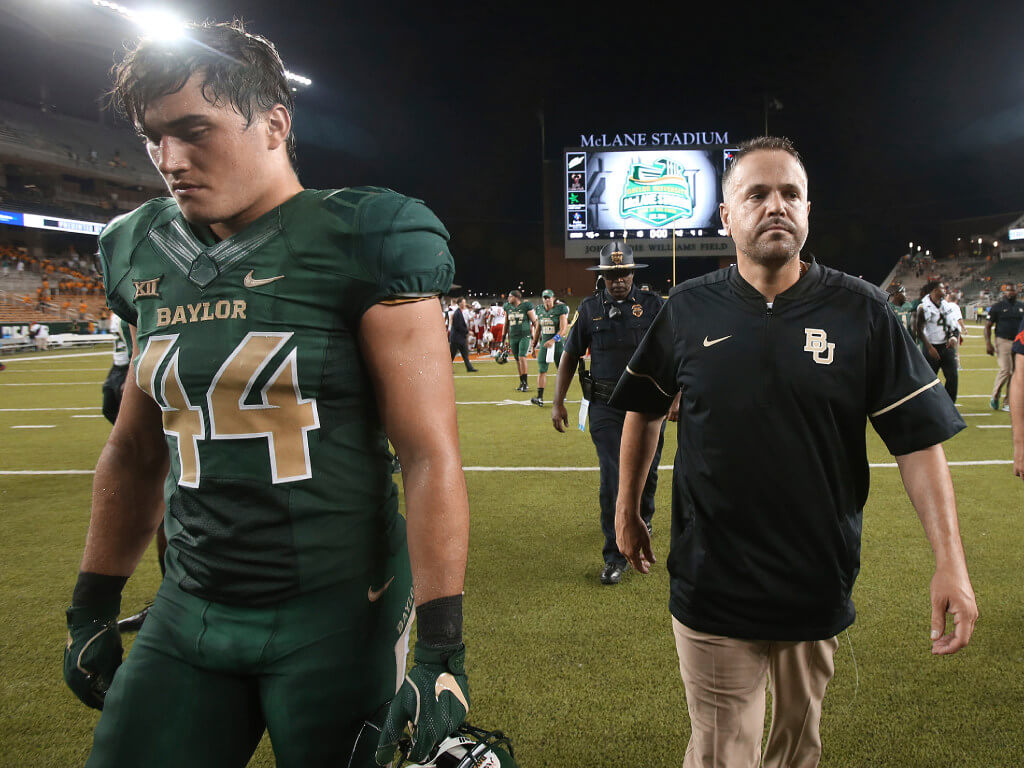 Oskeim Sports provides free football picks on a regular basis right here at its award-winning Blog.  If you are interested in premium football picks, please visit the online store and use Promo Code WIN25 to save 25%.

West Virginia remains the most overrated 4-2 team in college football, and the Mountaineers are traveling to the state of Texas for the second time in three weeks (played at TCU on 10/7).

West Virginia also finds itself in a classic letdown/look-ahead situation following its come-from-behind win over Texas Tech last week, with a home showdown against Oklahoma State looming on deck. By the way, the Mountaineers were outgained 513-396 in last week’s phony win.

Baylor is 4-1 ATS in the last five meetings in this series, 31-15 ATS in its last 46 home games and applies to a terrific 33-8 ATS system of mine that invests on certain college football teams facing an opponent that has allowed 31+ points in each of their last three games.

While the Bears are still winless (0-6), head coach Matt Rhule’s young squad has been showing improvement each week. Baylor covered the point spread against both Oklahoma (lost by 8 as 28-point underdogs) and Kansas State (lost by 13 as 15-point underdogs).

The Mountaineers’ defense has looked even worse versus conference foes against whom they are allowing 33.3 points and 494 total yards per game at 6.1 yards per rush attempt, 7.4 yards per pass attempt and 6.7 yards per play. West Virginia is also yielding 257 rushing yards at 5.9 yards per carry and 480 total yards at 6.5 yards per play.

The Bears’ attack has looked good at home this season where they are averaging 443 total yards per game at 6.4 yards per play. Baylor should score a decent number of points in this contest, which is significant in that the Mountaineers are 2-11 ATS when allowing 28+ points over the last three seasons and 6-26 ATS when giving up 6 to 6.5 yards per play.

Coach Rhule will have his team prepared for this Homecoming affair as he is 10-1 ATS at home versus .501 or greater opposition, 7-0 ATS following back-to-back road games, 23-9 ATS as an underdog and 28-12 ATS after the first month of the season.

Rhule has earned the respect of his players, and the feelings are mutual. “I said it after the game, these kids are unbelievably mentally tough,” Rhule said during his Tuesday press conference.

“They’ve been through a lot, and they continue to fight and scratch and claw, and I’m proud of those guys that go out and represent us on Saturdays. I hope our fans come out and cheer for our kids. And my message to our kids is simple. It hasn’t worked yet on the scoreboard but there are a lot of guys playing significantly better football.”

With West Virginia looking past its trip to Waco (revenge affair against Oklahoma State on deck), grab the points with the Bears as one of Oskeim Sports’ Free Football Picks for Saturday, October 21.